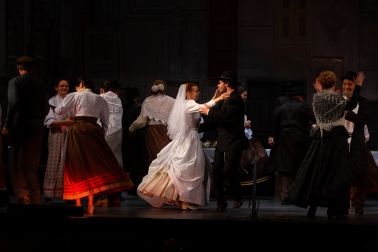 Sheldon Harnick - Jerry Bock - Joseph Stein’s hugely successful Broadway musical Fiddler on the Roof – directed by László Béres - will be presented at the Gyula Castle Theater’s All Arts Festival. Part of the Transylvanian Week events, the performance will take place on Tuesday, August 3, at 8.30 pm at the Lake Stage in Gyula, Hungary.

“I think it is possible to live without faith, but it is not worth it. This is one of the mottoes of my staging. What captivated me in this musical is the faith that Tevye experienced based on his conversations with the Lord. The authors show us the protagonist's relationship with God, that is infused with plenty of humor – at times he argues with Him, other times he asks or even begs, while sometimes he merely reports the events of the day. Tevye is constantly drawing strength from these conversations. For me, the most important conclusion to this story is the JOY stemming from it” – stated director László Béres about the performance.

Cluj audiences will be able to view the performance of Fiddler on the Roof on August 22, at 7 pm, in the theatre’s Main Hall.

Based on the Sholem Aleichem stories by special permission of Arnold Perl.
Produced on the New York Stage by Harold Prince.
Original New York Stage Production Directed & Choreographed by Jerome Robbins.
The representation of FIDDLER ON THE ROOF was made possible by agreement between Music Theatre International (Europe) Ltd. (www.mtishows.eu) and the THEATRUM MUNDI
Theatre and Literary Agency, Budapest (www.theatrum-mundi.hu).

Tickets for the Gyula performance are available at the ticket office of the Gyula Castle Theater, and online at jegy.hu.

Tickets for the Cluj performance are available online at www.biletmaster.ro until August 15, and from August 16 they can be purchased at the theatre’s ticket office.