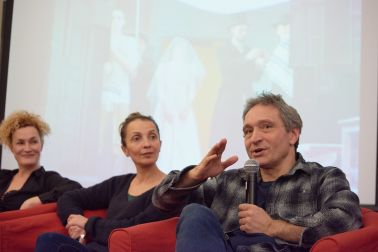 FIDDLER ON THE ROOF PREMIERE AT THE HUNGARIAN THEATRE OF CLUJ

The Hungarian Theatre of Cluj presents Sheldon Harnick - Jerry Bock - Joseph Stein’s hugely successful Broadway musical Fiddler on the Roof on Friday, February 21, at 7 pm. The production was directed by László Béres, who returns to work with the Cluj company after the staging of The Lubberly Wizard and Be Faithful Unto Death.

László Béres stated the following regarding the theme of the musical and why he chose to stage this particular title: “One of the story's threads is the poor milkman, Tevye’s, struggles, who is split between his love for his five daughters and his profound respect for tradition, since his daughters choose their husbands based on their feelings, and not as a result of a match. The other thread explores the relationship between the majority and the minority. I think it is possible to live without faith, but it is not worth it. This is one of the mottoes of my staging. What captivated me in this musical is the faith that Tevye experienced based on his conversations with the Lord.”

Choreographer Melinda Jakab talks about working with the actors: “I had to work with many different personalities during the rehearsal process. However, for me, the team itself is the protagonist. The challenge was to transform these distinct personalities into a team, and I believe we were successful in that.”

Actor Zsolt Bogdán, who will portray the principal role, referred to his approach of Tevye: “The standard is high because there is a movie version of the musical as well. We were trading on an already known path, so in a way the nails were placed in the wall, however, one must be able to walk also on such a path. Laci has guided us wisely throughout this entire process.” Emőke Kató, who plays Golde, Tevye’s wife, added: "It was a joy to tread on this path together, as a team."

Based on Sholem Aleichem stories by special permission of Arnold Perl.
Produced on the New York Stage by Harold Prince.
Original New York Stage Production Directed & Choreographed by Jerome Robbins.
The representation of FIDDLER ON THE ROOF was made possible by agreement between Music Theatre International (Europe) Ltd. (www.mtishows.eu) and the THEATRUM MUNDI Theatre and Literary Agency, Budapest (www.theatrum-mundi.hu).

Tickets for the premiere of Fiddler on the Roof and subsequent performances can be purchased at the theatre’s ticket office and online at www.biletmaster.ro.