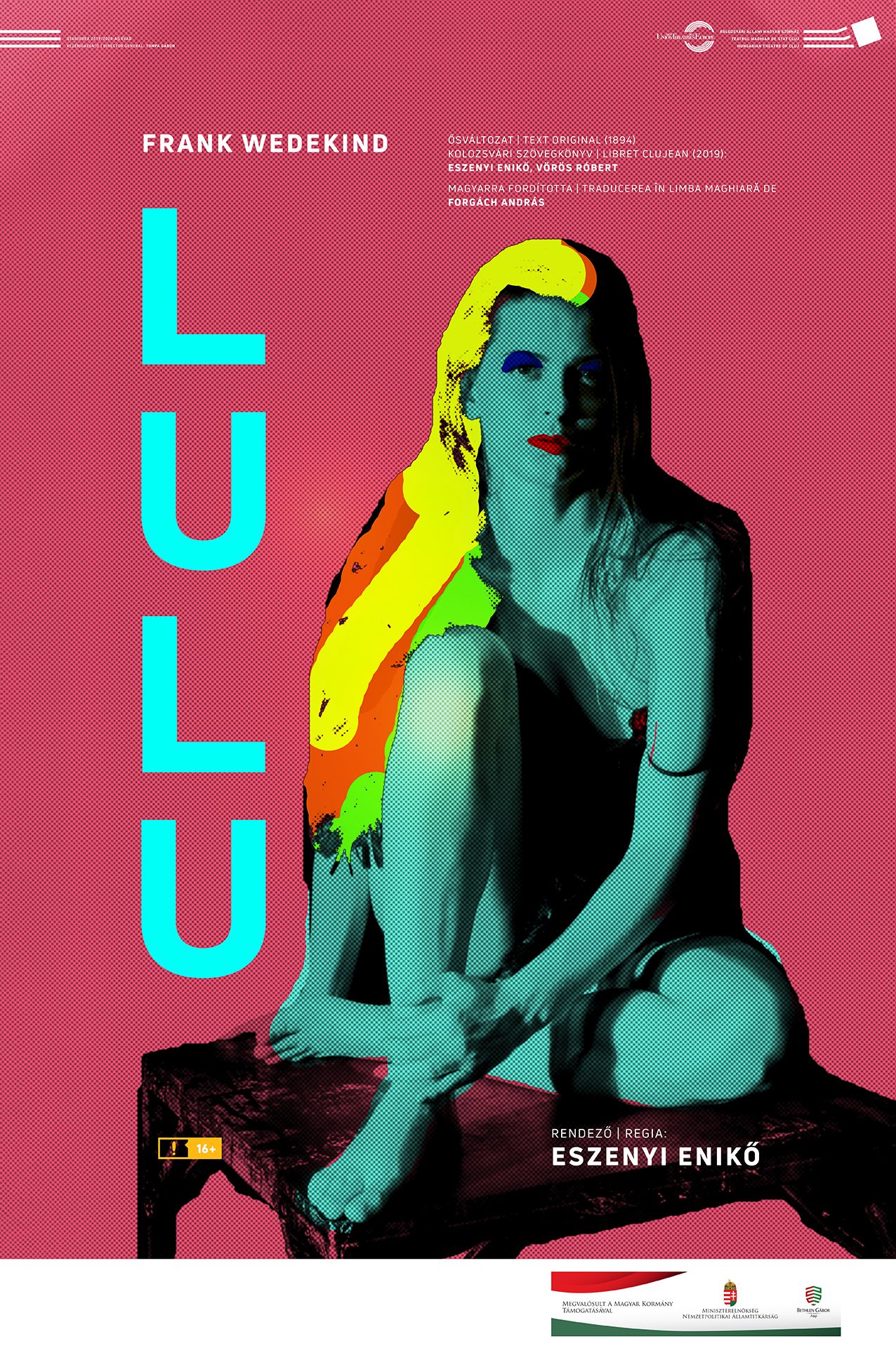 It's clear, clear as daylight. Eszenyi Enikő approached Wedekind’s text without hang-ups. She began by carefully reading the original text dating from 1894 (in Romania the play was first staged by Soare Z. Soare at Marioara Voiculescu’ Theatre, the same one who in 1917 also played The Serpent), but everything she proposed and carried out on stage goes far beyond a certain temporal frame or a strict theatrical aesthetic. This is why the Hungarian Theatre of Cluj’s production of Lulu, in my view, seems to lend form, expression, meaning and concreteness to a higher level of artistic impurity, creating new and provocative paradigms. I believe what we have here is a seaming impurity, a post-postmodern one, perhaps, that illustrates the course of an artistic path consisting of abandonment and rediscovery. This path begins with the removal of the temporal aspect of Wedekind's text, but is materialized by the constant relation to its deep spiritual aspect. The acting and scenery are impressive through the kinetics and volumes employed (Helmut Stürmer), the costume design evoke a rare fantasy world (Pusztai Judit), the soundtrack is both obsessive and enveloping (Mester Dávid); all the elements brought forth the rise to a new level of power what ultimately represent the essence of depth, beyond the temporal, the perennial entanglements of the German playwright’s writing. An essence that she rediscovers and pours into the fertile paste of modernity, of a strict and stimulative topicality that is the production directed by Eszenyi Enikő.

Lulu, admirably portrayed by Éva Imre, is an orphaned Helen who has become the object of desire, an apple of Discord hurled from father to son, from husband to lover.

If we would limit ourselves to the degree of her libertinism, Lulu has more in common with Gautier's Mademoiselle de Maupin. However, there is a mystical thrill lurking inside the lust for crime exhibited by the heroine’s group of admirers. It is the same lack within a human being that ultimately makes the bourgeois in Pasolini's "Theorem" to go insane, to become either artists or saints. It is the same mechanism that orders Sade's debauchees to spend their lives killing their soul, without success, as the reiteration of crimes is - according to Klossowski - nothing more than "the immediate practice of the theoretical denial of the soul’s immortality". Director Enikő Eszenyi and playwright Róbert Vörös offer us a bitter-sweet version of an uncomfortable dramaturgical piece, signed by the enfant terrible of expressionism, who draws our attention to the fact that we live in a type of hyper-reality, in a dysfunctional, chronically kitsch-infested utopia, while Jack the Ripper would be the savior who can "repair" all this through ablation. The nihilistic re-chromatization of the civilizing hero represents the challenge to which Bogdán Zsolt rises with great elegance.

(...) "Lulu" is an eminently vibrant performance, ornate with erudite references (Nietzsche with Zarathustra wearing a skirt, Goethe's emancipated Mignon, Schubert's “Death and the Maiden” quartet in a café-concert version, Revolution quoting herself, while posing as the timeless mistress of death) that are capable of resurrecting our Wi-Fi-numbed minds. A pedantic prophet like Wedekind short-circuits our ambivalence maintained by interactive ailments and invaded by the lifelike pictures of a disillusioned collective imaginary.

Whether implicitly or explicitly, Lulu is a prostitute who seizes every means (primarily her femininity and beauty) to escape misery. At the same time, she is also an instrument, a tool by which men achieve their selfish goals. Éva Imre, who, despite her youth, grew to become one of the strengths of the Cluj company in the short time since her arrival – portrays this lewd, yet lovable character who deserves a better fate and who is, in fact, the victim of her own circumstances (and the men around her) in an incredible manner.  Of course, she also is well acquainted with intrigue, since with the use of her extraordinary femininity she can persuade her “admirers” to do almost anything.

However, the last minutes of the performance were undoubtedly dominated by the huge, electrifying presence of Bogdán Zsolt who was entrusted with the role of Jack the Ripper. In other words, a genius actor, an emblematic artist for what the theatre symbolizes today in Romania - and not just the Hungarian theatre –, has waited for more than two and a half hours in the wings to honor a role that is present on stage for only ten minutes. A presence transformed into a delicate, precious jewel. A mediocre actor would probably have assimilated the evolution of Jack the Ripper with what is termed by the annoying term of execution. Bogdán Zsolt, by portraying what is in theory called an episodic role, thought of giving us a celebration of the art of acting. Also a didactic example of what value represents.

"I cannot be anything other than a woman when you are around me."

The young painter is commissioned by an influential secretary of state to immortalize his new wife, Lulu. Left alone, the painter and his model get into a dangerously sensual game...

This is how Frank Wedekind's play Lulu begins, the story of the rise and fall of an orphan girl found on the street. Lulu becomes the object of petty male desire, hopping from bed to bed, climbing the social ladder with every single new marriage she enters...

The author's shocking depth of human knowledge, his insolent humor, sprinkled with scandalous eroticism, transforms the story of a woman's destiny into an extraordinary production, just as thrilling as a detective novel. The Hungarian Theatre of Cluj presents the play based on its original version.

“Wedekind digs deep and brings horrible things to the surface. Reading his work, I am amazed that he was able to survive its creation. As a translator, I feel physically ill every time I go through the scene with Jack the Ripper, or when I witness Puntschuh's despicableness, Casti-Piani's meanness, Alwa's suffering, Schigolch's stench, Geschwitz’s torment, or Schöning and Schwarz's collapse into their own whirlwind.” 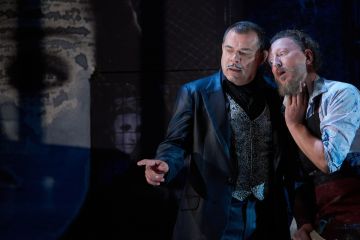 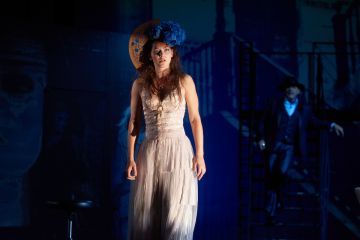 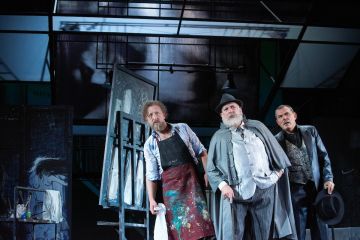 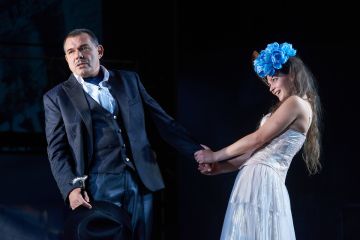 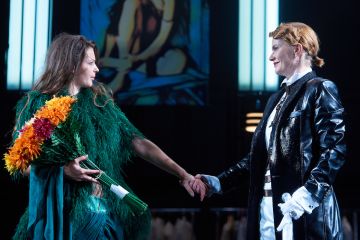 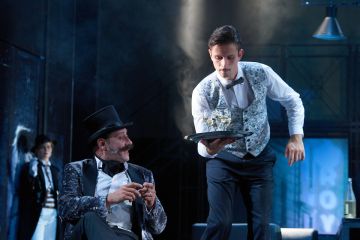 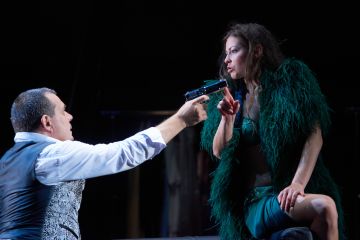 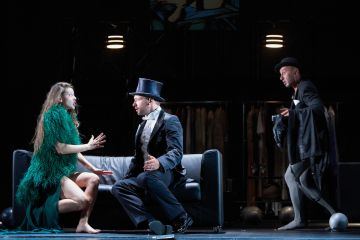 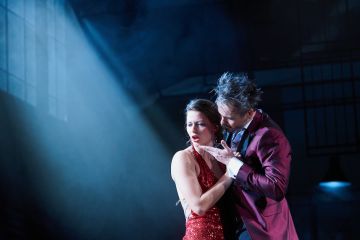 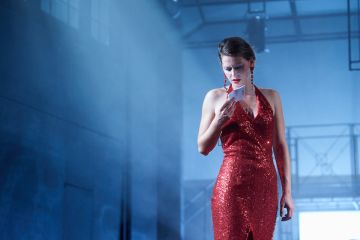 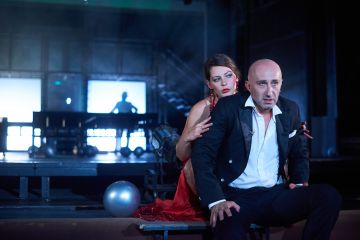 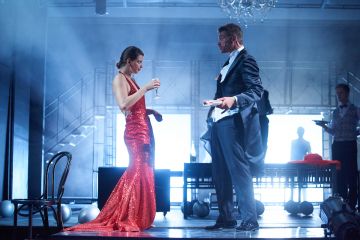 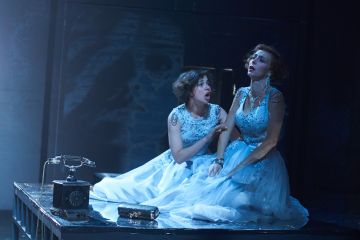 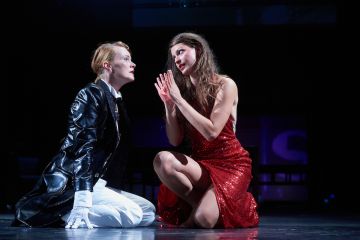 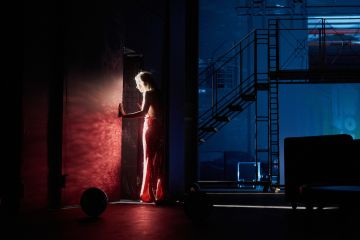 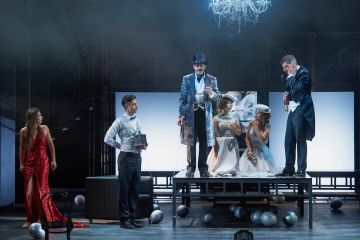 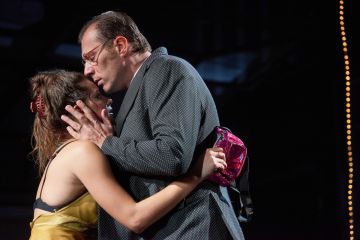 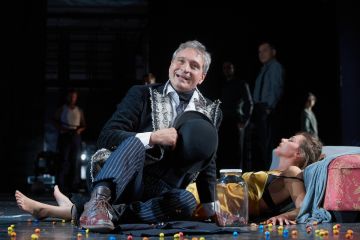