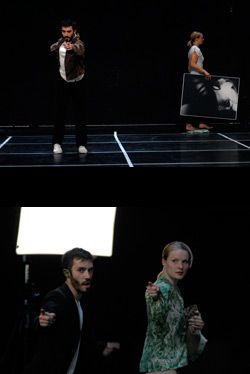 Date of the opening: October 16, 2010
Man: Driven, intelligent and determined. True to himself, he is absorbed by his thoughts. His self-imposed solitude becomes loneliness.
Woman: his counterpoint. Observant, analytical and contemplative. On the one hand understanding and admiration for his world, on the other incomprehension and a desire to connect. Bodies without contact. Bodies in desperation.
I SOLO MENT is an interwoven double solo. A distant, yet loving sketch.

I SOLO MENT was nominated for a Zwaan (Swan) by the VSCD (Dutch Association of Theater and Concert Hall Directors) as one of ‘the most impressive dance production of the 2008/2009 season’ and was selected for the Nederlandse Dansdagen (Dutch Dance Days) as one of the most important productions.
After completing her dance education (June 1991) at the Rotterdamse Dansacademie (Rotterdam Dance Academy), Ann Van den Broek danced with the Elisa Monte Company (New York, 1990), Dansgroep Krisztina de Châtel (Amsterdam, 1991-1998), Galili Dance (Groningen, 1998) and Charleroi/Danses (Charleroi, 1998-2000).
From 2000, she works for vzw WArd/waRD (Antwerp), Korzo Producties (The Hague) and Danswerkplaats Amsterdam. She created a number of choreographies, such as:  Quartet with One and FF+Rew.