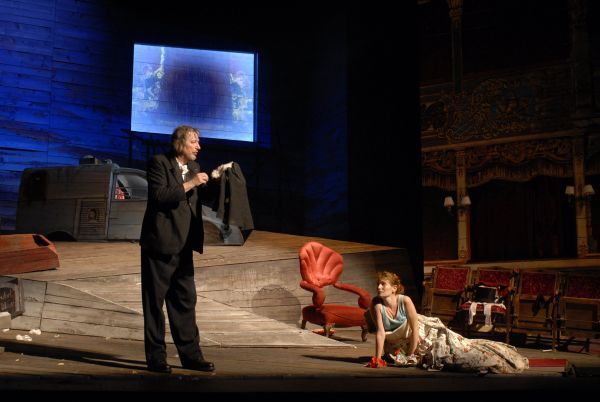 Merteuil
Muriel Mayette
Valmont
François Chattot
directed by
Matthias Langhoff director's assistant
Hélène Bensoussan set design
Matthias Langhoff, Pierre Meine, Michel Coquet costume design
Renato Bianchi films
Matthias Langhoff light design
Frédéric Duplessier production
Véronique Appel Dakuyo
Date of the opening: december 08, 2008
“Quartet is the most performed of Heiner Müller’s works, next to Hamletmachine, and is considered a classic in the contemporary repertoire of European theatres. It is a text of great virtuosity for two good actors. Müller’s Quartet deserves to be rediscovered. It is a wild, youthful, destructive, cruelly comic and unbearably disturbing piece. It fits into the line of Miss Julie in every aspect, because both texts remorselessly analyze the structure of the relationship between the two sexes and both want to be done with illusions. Müller’s characters, just like Strindberg’s, are fragmentary or, in Strindberg’s words, are made up of detritus. Their intimacy, their love, their love-life becomes a real civil war scene. This is a theatre of eyes, words and touches. The rules of the game are set by desire. Ms. Merteuil and Valmont are fighters the same as Miss Julie and her lackey. It is a manifestation of power under the disguise of love. Quartet is not a play that transcends time and space. In fact, the time and the space are perfectly defined: ‘a salon before the French revolution | a gun emplacement from the Third World War.’ Thus, it deals with places defined by the periods of major historical events. This space and this time are part of the text and of the play. Quartet doesn’t belong to the general view expressed in the statement ‘farewell to history.’ Quartet lives in history.”  Matthias Langhoff 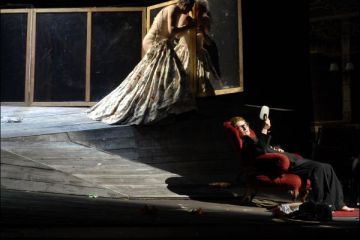