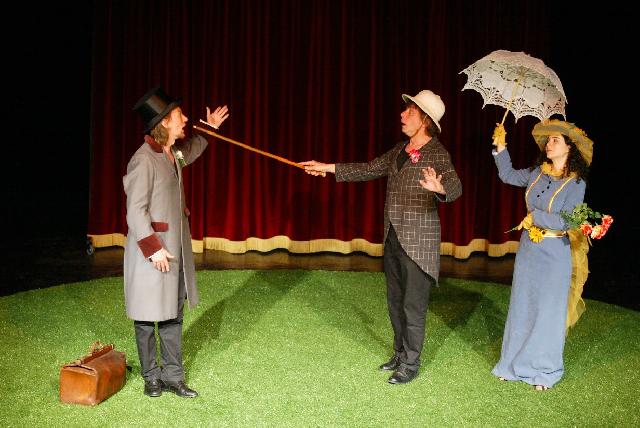 I want somebody to talk to me


A dumb personage steps forward. On an inscription one can read: I want somebody to talk to me. This demand summarizes the whole life-work of Calaferte: the expression of an “I” (ego), the manifestation of the will, and the word as life’s prime want.
This dumb proclamation of the word’s rehabilitation and circuit among people gave the title of the performance, which is built up of different works (short plays, notes, aphorisms, poems), as a kind of travelling in the world of Calaferte.
Louis Calaferte was born on July 14, 1928 in Italy, he spent his childhood near Lyon. At the age of 13 he decided to become a writer, his first book was published in 1952. He isn’t a very famous writer, but he created an important life-work (he wrote short-stories, poems, essays, notes and plays). In 1978 he won the Ibsen-prize, in 1992 the National Literary Prize. He died on May 2, 1994.
Alain Timar .
After finishing his studies he has worked at several theatrical companies, and then he established himself in Avignon, where he has founded Théâtre des Halles, being its manager since 1983. He has three collateral activities as a director, as a set designer, and a visual artist. He has created more than 45 performances in France and abroad, and several exhibitions and installations. He was, who presented to the audience Gao Xingjians’s dream-world a good long time before his Nobel-prize. He has also presented Václav Havel’s or Valère Novarina’s plays. His artistic work attests his continuous interest towards other cultures. This never-failing, vigilant curiosity and intellectual peregrination on the one hand springs form his mixed Jewish origins (paternally being Hungarian, and on his mother’s side he has Spanish and North-African origins) and on the other hand from his double qualification in literature and fine arts.
He is one of the few French directors who are invited to work abroad, and are able to cope in a foreign language with dynamic and often innovative productions, which illustrate the openness towards the word and the empathy. As an example we can mention Ionesco’s Rhinoceros in Hungarian, at Budapest, or The Chairs in English in Washington, Genet’s Tightrope Walker in Italian, at the Palermo Festival, Mohamed Kacimi’s Taxi Babel in 12 languages presented by an international company, and not long ago Samuel Becket’s Waiting for Godot in tagalog language, presented in Manila.
His further productions include Eugène Ionesco’s Amédée or How to Get Rid of It (1977), Aristophanes’s Peace (1978), Federico García Lorca’s When Five Years Pass (1979), Marguerite Duras’s – Yes peut-être (1981), Elie Wiesel’s Ani Maamin (1984), Péter Nádas’s Coming together (1990), Miklós Hubay’s Geniuses’s School (1992), Samuel Beckett’s Endgame (2005), Jean Genet’s The Maids (2006), Alfred Jarry’s Ubu the King (2007). I want to be talking had its opening night in 2008. His last production in 2010 is Simples Mortels, based on the novel of Philippe de la Genardière.
Alain Timar is laureate of Pro Cultura Hungarica prize (1990), he is a Chevalier of Arts and Letters of France (2003), and laureate of the National Order of Merit (2008).
On the stage of Théâtre des Halles we can follow a cavalcade of wickedly human characters. There aren’t any acrobats here, or clowns, or elephants, there are only words. You’re welcome in the burlesque theatre of Alain Timar and Louis Calaferte. (ARTE)
For the performance I want to be talking, Alain Timar selected fragments, sentences, scenes from the genially frantic life-work of Louis Calaferte and has put together a crowded circus show, the circus of the humanity. The three equally great actors initiate the audience into their jokes, confessions, break-outs, and depression. We don’t learn anything about the world, and about Calaferte’s art, but his laughter, his enthusiastically hopeless laughter is transmitted through brilliant acting. (Gilles Costaz - Les Echos)
The three perky actors are visibly enjoying the play, as the audience is enjoying too. They are each other’s complementary parts in their cynical, funny, desperate roles. Alain Timar uses the world of the knockabout performance in a cultured direction, realizing the microscopic examination of the world. It is overwhelming and affecting. One can't walk away from this travelling untouched. (Camille Bosshardt - L’Hebdo Vaucluse)
Cast: Yaël Elhadad, Nicolas Gény, Roland Pichaud 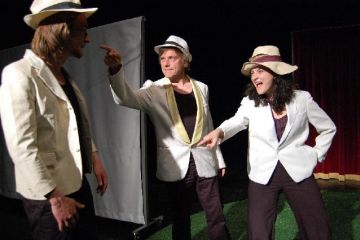 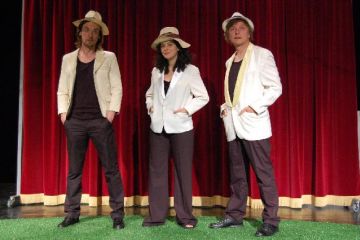 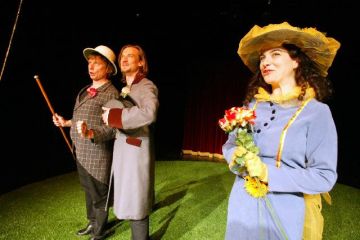 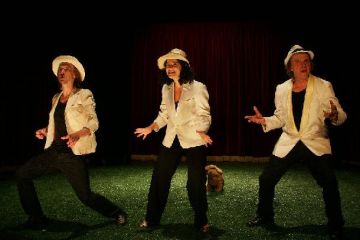 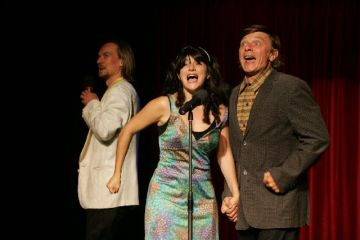 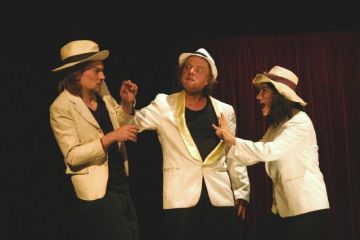 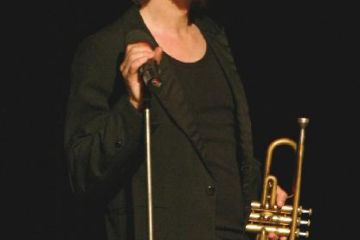 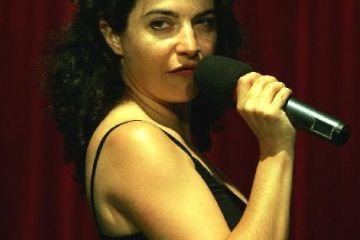 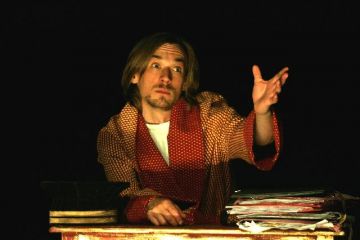 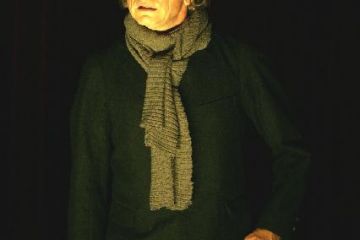