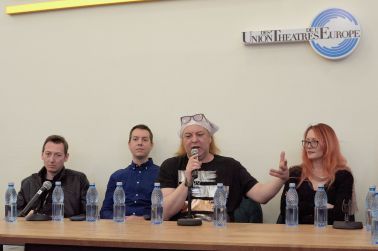 After a long time, the audience of the Hungarian Theatre of Cluj will be able to view in person the company's newest premiere. Directed by Zoltán Puskás, the premiere of the musical production of Animal Farm, based on George Orwell's novel, will take place in the Main Hall of the theater on Friday, May 21, at 7 pm. The text of the world premiere presented in Cluj was written by Róbert Lénárd, while the music for the performance was composed by Ervin Erős and Dávid Klemm.

Zoltán Puskás is working with the Cluj company for the third time, having previously staged the highly successful productions of The Wizard of Oz and The Jungle Book.

In connection with the current play selection, the director from Vojvodina said that he wanted to work with a piece that most reflected the present: “For Orwell, formulating the idea of fear is the most important thing, I wanted to express this in the performance as well. The political instruments have not changed much, there are many similarities between the elements present in the Orwellian text and the current situation regarding the pandemic.” Moreover, Zoltán Puskás noted that in the performance he placed emphasis on the ironic type of humor that comes from life-like situations.

According to the composer Ervin Erős, it was an exciting challenge to create original music for the Cluj performance alongside David Klemm. The musical realm of the performance that is made up of twenty-one-songs combines the genres of the musical and rock opera: “It's a rougher piece from a musical standpoint. We had to bring the atmosphere of a revolution into the orchestration as such, but we also explored a softer sound when the text required it.”

Costume designer Andrea Ledenják tried to create the costumes for the animal characters with subtle allusions that do not follow the classic patterns, but help the actors carry out the intense choreography set forth by Jakab Melinda.

The Animal Farm's stage version and song lyrics were written by Róbert Lénárd, its music was composed by Dávid Klemm and Ervin Erős, and was directed by Zoltán Puskás. Choreographer Jakab Melinda, costume designer Andrea Ledenják, lighting designer Róbert Majoros and accompanist Zoltán Horváth were also part of the team that created the production.

The production was supported by the Government of Hungary and the Gábor Bethlen Fund.

Tickets for the premiere of Animal Farm and subsequent performances held on May 22 and 28 can be purchased at the theatre’s ticket office (weekdays between 10 am and 2 pm) and online at www.biletmaster.ro.