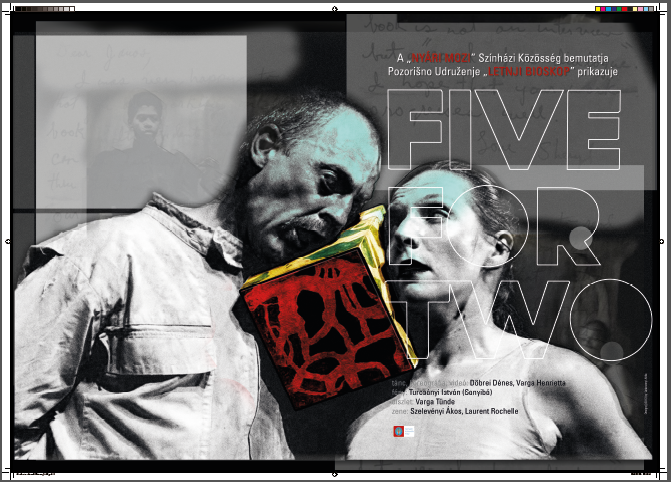 With:
Dénes Döbrei, Heni Varga
choreography
Dénes Döbrei, Heni Varga costume design
Bjanka Ursulov set design
Tünde Varga music composed by
Ákos Szelevényi
Date of the opening: April 07, 2015
In 1973 János Pilinszky was in Paris, where he became ill and was tended to by his friend’s fiancée, Sheryl Sutton, who was also the esteemed actress of Robert Wilson. Every day she brought a meal to Pilinszky, made tea, arranged the fevered poet’s pillow. Inspired by their meetings and by Robert Wilson’s performances, Pilinszky wrote Conversations with Sheryl Sutton, an essay type of novel of a dialogue about the theatre, about silence, about human relationships, about a new form. In 1984, Ottó Tolnai met Sheryl Sutton in New York and their meeting inspired a prose-poem that has not yet been finished, but which serves as a pointer for the creative work of the two dancers. Their dance performance presents and shows the relationship of Sheryl Sutton and Pilinszky from the poet’s point of view and is accompanied by Ákos Szelevényi’s music which includes sounds of nature.
There’s a chair on the stage, a lady on the chair, and a box in her hand. Several questions might arise. What does the square-shaped box contain? Sheryl Sutton holds a black bird in her hand, a living creature. There’s a chair on the stage, a lady on the chair, and a box in her hand. We see the starting image of our performance. Silence, sounds of nature, chirping, twittering. This is our silence in the intimate, homely warmth of the stage.
Thanks to all who contributed to the realization of the performance with their spiritual and physical presence.
The performance was created with the support of the Dezső Kosztolányi Theatre.