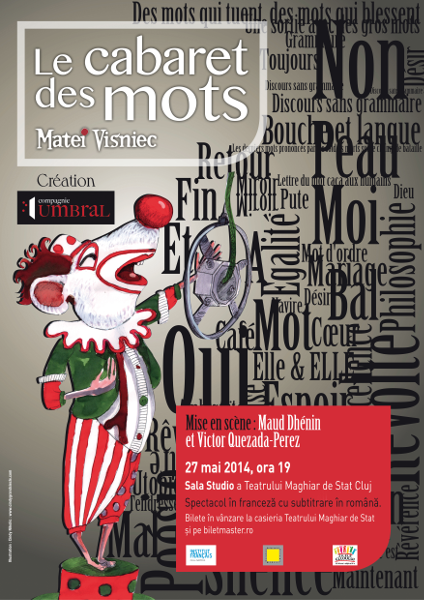 Imagine a man’s brain, where words live, every possible word, beautiful and ugly, poetic and ordinary alike. Sleeping clowns live inside the picture-frames of the brain and are the embodiments of these words. Soon, they’ll step out from the frames to present and defend the word they represent.
The author of Le Cabaret des Mots (Cabaret of Words) is Romanian playwright Matei Vișniec, who has lived in Paris since 1987. The text is a subjective journey in an inner dictionary, and was adapted to the stage by authors Maud Dhénin and Victor Quezada-Perez, who have created an original performance. The performance is the result of a literary workshop spent at the Umbral Company of Ile de France. This “cabaret” talks about words that are embodied by a clown in a devilish, insolent or poetic way, depending upon the specific word. The performance mixes texts, music and songs creating a wonderful world of cabaret.
Matei Vișniec evokes the power of language, the grotesque nature of ideology, and condemns totalitarianism, in this way giving a social and timeless dimension to this poetic performance.