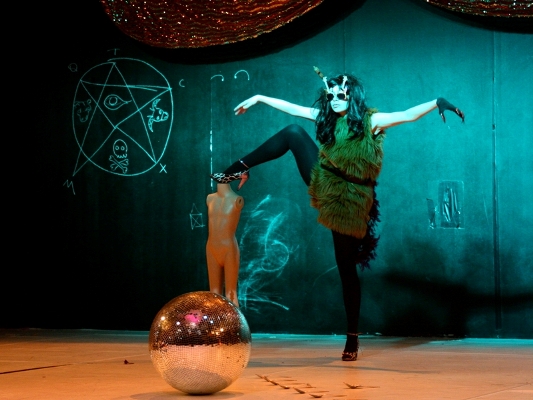 
Black magic with a little mauve
Good-bye! (or the limbic system's discreet outlets)
– extrasensory trance and fairy play –
Confusing the cultural medium at home with a project inspired from a fictional biography the choreographer Mihal Mihalcea had left his entire artistic heritage to a strange guy and disappeared. He has been releasing his new art projects under a different name that refers to a new identity of a choreographer from Lebanon. Being sensitive to the extrasensorial this latter person is a controversial figure, deals with choreography, magic and foresight. Farid Fairuz, namely the new theatre identity of choreographer Mihai Mihalcea mixes concepts, ideologies, religions without reserve and thus he creates a strange performance inspired by an extasy that is supplied to the Romanian public sphere by certain guys who take the wrong turn. The performance that was rightly called an extrasensory trance and fairy play, or the incantation of the Romanian culture gives hopes of a real spectacle full of trance, magic and political connotations.
The cast includes performers who are among the best-known artists of contemporary Romanian dance-art: Mădălina Dan, Maria Baroncea, Alexandra Pirici, Carmen Coţofană and Iuliana Stoianescu.
Farid Fairuz is commissioned by The Golden Dawn Hermetic Order to renew the Great Extrasensorial Work - the "Good-bye (or the limbic system's discreet outlets)". Thus he keeps an eye on the emancipation of the basic values of Romanian society and prepares the next leap by size of the development of human conciousness against the spiritual trends of joint stock companies, academic and religious institutions. By merging the two cerebral hemispheres into the unity of simultaneous conciousness Fairuz invites the audience to relive by their whole being their connection in time and space to other beings.
Brain-control, alpha level: Farid Fairuz
Synergic counselors and oracles: Maria Baroncea, Alexandra Pirici, Carmen Coţofană, Mădălina Dan, Iuliana Stoianescu
Disguised healing methods and manipulative techniques: Andrei Dinu
Melody-therapy: Miles Davis
Light-therapy: Cătălin Nicolescu
Subtle energies: National Dance Center and Solitude Project
Written and audiovisual complementary information: http://www.youtube.com/watch?v=MfEcNii9d8s
http://faridfairuz.tumblr.com