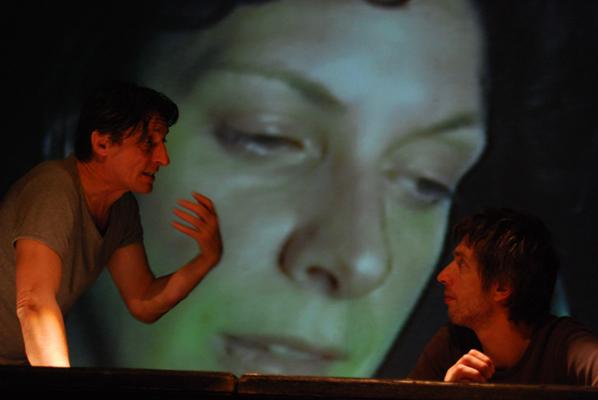 Date of the opening: december 05, 2010
(…) The performance entitled “Process_in_Progress”, as part of the trilogy Process_City, directed by Boris Bakal, succeeded in evoking the inexorable circling around the same patterns by staging scenes from Kafka’s novel The Trial and Orson Welles’ film by the same name. The depressive atmosphere of Kafka’s novel but also the dynamics of the performance was achieved by minimal gesture, constant role shifting, cross-dissolving scenes and abrupt cuts that join the seemingly disparate elements.(…) The suppressed and hushed emotions spoke through even the tiniest body gestures as the live video projection often confessed them, revealing the truth otherwise hidden in front of the others.
Katarina Kolega, “The vicious circle of life”
(Vjesnik daily,  March 17, 2004)

“Process_in_Progress”, directed by Boris Bakal, might be interpreted as playing with the absence of political subject, more precisely, as pointing out to the impossibility of discerning his/her face even when it is being shown in extremely close-up by several cameras or when s/he is being interpreted in turns, ad spectatorem, by three performers (Nina Violic, Damir Klemenic, Boris Bakal). (…)The important moments of the performance are less connected to the general “space of anxieaty” of the performers: nowadays, we all feel “kafkaed” by the surveillance machines of unjust laws. I find much more interesting than the general truths the untamed irony of the seemingly amiable and suave voice of the flamboyant Nina Violic (…) or Damir Klemenic’s impatience in front of the obvious stupidities of the procedure, which penetrates the controlled mimic with nervous smiles; or the steely calm, quiet and rationally indomitable manner in which Boris Bakal fixates the audience as the performer of “being trialed”: No, this is not just my problem. I am also touched when I see in the video the building of City Court of Zagreb, hence when we cease to speak about crime and punishment from novels, and when we are faced with the certainty that we sit in the house of law in each moment of our lives and that we are divided into the guilty and the innocent ones and sorted by the divine superiority that makes the difference between the “right” and the “wrong”.
Natasa Govedic, “Courthouses in citizens’ beds”
(Zarez bi-weekly cultural magazine, October 20, 2005)

(…) Bakal’s adaptation of The Trial is deprived of “modernization” in the sense of altering or adding to the original text or inserting scenes from our actual reality. The performers hold strictly to Kafka’s words but the words are merely a bone-structure or a foundation for a complex (even in technological sense) procedure. (…)
What is it that the world of Kafka’s Trial means to each one of us: a world of seemingly incomprehensible and hallucinating guilt into which we are drawn (innocently?) together with Joseph K. and which overwhelms us? Will our associative mind call into memory the war-time anxiety, the guilt of being “merely” of wrong nationality or conviction, the trial in The Hague, or some other, much more personal “kafkaesque” situations? This is what this performance leaves open, avoiding any literal meaning or banality through its deliberate multiple meaningfulness.
Srecko Pulig, “A performance that avoids any literal meaning and banality”
(Jedinstvo bi-weekly magazine, November 4, 2005)

Without any mystification and no prejudices whatsoever on how (a spectacle) should appear in theatrical sense, the three actors brought about the character of Joseph K with such ease bringing closer to us with the same ease all that is happening to him in all its emptiness and fullness.
Asja Krsmanović, “Shadow Casters – a unique theatrical experience”
(MESS Bulletin, October 27, 2008)

The performance based on Kafka’s Progress_in_Progress, conceived as a study of “shooting” or documentary recording of a three-fold protagonist who is repeatedly disappearing and re-emerging in front of spectators’ eyes (with the help of a mixing desk and an ardent VJ), merging into a three-actor mask of a vaguely fatal “death sentence”, indicates the bare “mechanism” of human nullification. Interpreted by Nina Violić, Damir Klemenić and Boris Bakal, Joseph K. is a multiplied performing testimony on the irreversibility of the process of human “impeachment” and deterioration… At the same time, the narrator’s voice points out that death is a form of “awakening” from which there is no return to the anxious drowsiness. He says this with a tone that indicates that the “new” Joseph K. is certain to be already sitting in the audience and is to report immediately to duty.
Nataša Govedić, «Strategies of disappearance as re-emergence»
(Zarez bi-weekly cultural magazine, January 22, 2009)


The performance is the third part of the trilogy Process_City inspired by Franz Kafka’s novel The Trial and its philosophical and political implications.
Unlike the second part of the trilogy, Ex-position, which tackles one part of The Trial, the parable Legend of the Law, in the form of a unique travel through one’s own memory, feelings and sub-consciousness, and the first part of the trilogy, Vacation from History, a meta(physical) comment on Kafka’s work as a travel on the edge of collective and individual consciousness, Process_in_Progress is based on the adaptation of the entire Kafka’s novel and shaped into a VJ opera-performance, juxtaposing the live mediums of actors and video.
It was produced by Bacaci Sjenki (Shadow Casters) in 2004 as part of Festival of Croatian Film in Zagreb in co-production with the festival and Student Centre and performed in the Student Centre Gallery. It was financially supported by the Ministry of Culture of Croatia, City Municipality of Zagreb and Orchestra Stolpnik (Bologna, Italy).
After the initial success at Festival of Croatian Film, Process_in_Progress was subsequently presented at the Karantena Festival (Dubrovnik, 2004), Small Front Festival (Zagreb, 2005), Festival Contatto (Udine, Italy) and Sarajevo International Theatre Festival MESS (2008), where it had won the Avaz Dragon Award as part of the trilogy Process_City. 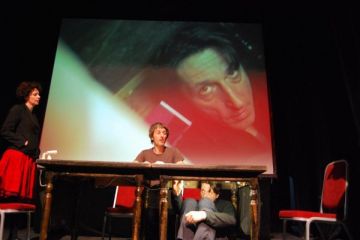 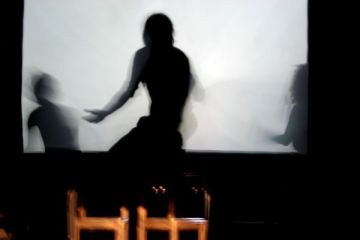 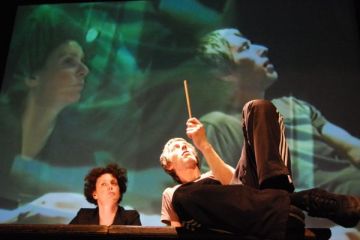