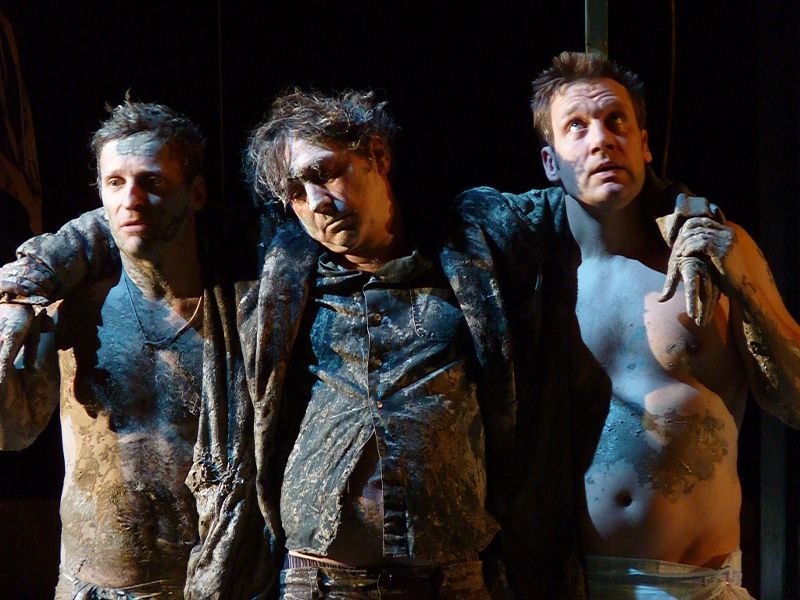 Performance of the National Theatre, Prague

The performance on the National Theatre's site
The two-Act play about a never-ending, dreary waiting for someone who might just possibly bring a sense of meaning to human life has been interpreted in countless, frequently contradictory manners. The main characters, the old tramps and clowns Vladimir and Estragon, sit beneath a tree and wait for somebody called Godot whose arrival is, however, delayed day after day. Their dialogues, based on repetition of seemingly incoherent fragments of sentences or clichés, do not say anything specific about the two men. Instead of protagonists, the heroes become spectators of a kind of play within a play, which is a stylised vision of oppression and violence as age-old bonds of human society. The big-mouthed tyrant Pozzo goes blind in this play, his prattling slave Lucky, crushed under the weight of burdens and whiplashes, protests in vain and is eventually struck dumb. The reaction to this spectacle, which does not offer any way out, is a harsh, partially pantomimic game of the two central characters. Eventually, they flirt with the possibility of committing suicide, yet waiting on for redemption is much simpler. Beckett’s most celebrated play, first performed in 1953, was a watershed in the development of modern theatre.
Copyright © 2020 Hungarian Theatre of Cluj. All rights reserved