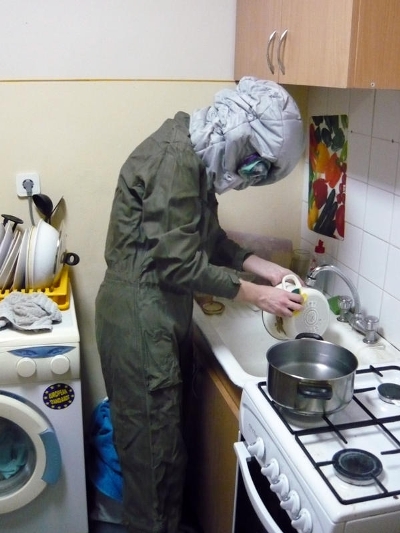 Co-production of NCDB and NCFA

concept and actor
Alexandra Pirici set and costume design
Andrei Dinu
Date of the opening: April 29, 2011
The Greys made contact with a world governmental body for the first time in 1933 in Germany. However, they were turned away by the German government because it had already committed itself to involvement with the Giza intelligence. A renegade group of human extraterrestrials that were headquartered under the Giza plateau in Egypt. They were predominantly Pleadians. They were on their own, doing their own thing. Ashtar, Commigal, and even Jehovah were a part of the group, for some time. They came down here and played God with us.
Alexandra Pirici graduated, in 2001, from “Floria Capsali” Choreography Highschool – Bucharest. In between 1997-2000 she was a scholarship student at the Vienna State Opera Ballet School. In 2005 she graduated from the National University for Drama and Film – Choreography section. She works as an independent choreographer and performer. Productions: In bloom, Sprint, Not a life saving device, Show, You should know that he drank like an old whale. Her work has been presented at the Balkan Dance Platform, Bucharest Biennale, Kanuti Gilde Saal –Tallinn, National Museum of Art – Bucharest, Nottdance Festival - UK (Artists sharing), etc. In 2008, together with Andrei Dinu, she initiated “The May Salon”- a squatting project. She collaborated with the choreographers Joe Alegado, Ioana Macarie, Eduard Gabia and attended workshops with Joe Alegado, Kombina Dance Company, Mark Tompkins, David Zambrano, Lisa Nelson, Inge Kaindlsdorfer, Leah Stein, John Jasperse, Martin Sonderkamp, Brynjar Bandlien.