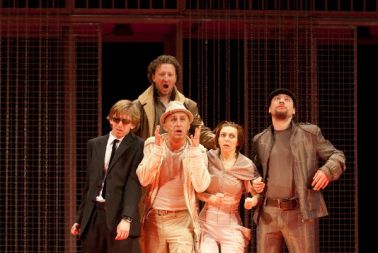 THEATER ON AIR: THE WIZARD OF OZ ON INTERNATIONAL CHILDREN’S DAY

On the occasion of International Children’s Day, the highly successful musical The Wizard of Oz – initially premiered in 2012 -, will be broadcast on the theatre’s Facebook page on Sunday, May 31, at 11 am. The recording can be further accessed until the evening of June 1st.

Zoltán Puskás, the director of the production, has stated the following about the performance based on Frank L. Baum and Tibor Zalán’s text: “Who does not know of The Wizard of Oz… as a film, as a musical or as a novel – it deals with eternal problems. We have tried to create a new musical… with a new text, new music which speaks to modern people… remaining faithful to the original story, of course. We have a story that talks about friendship, courage, love and, last but not least, about seeking ways and solutions. These might be called clichés; however, I still believe in their value, I believe in the human soul. If we are capable of growing mentally just a little, if we know how to be devoted, to pay attention to one another, if we know how to love without self-interest… then we will save ourselves, our fellow human beings – and we might be useful to society. The performance is for both children and adults; it has humor, great scenes, and many, many songs and dances…”

The choreography was created by Ildikó Gyenes, the set was designed by Zoltán Puskás and Tibor Tenkei, the costumes were envisioned by Andrea Ledenyák, while the musical coordonator of the production was Katalin Incze G.