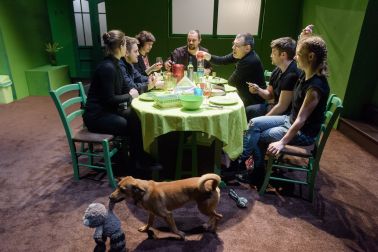 ILLEGITIMATE AT THE FEST-FDR FESTIVAL OF TIMIŞOARA

The FEST-FDR audience in Timişoara will have the opportunity to enjoy the Hungarian Theatre of Cluj’s production of Illegitimate - based on a script by Adrian Sitaru and Alina Grigore, and directed by Adrian Sitaru – on Monday, November 4, at 5 pm in the Main Hall of the German Theatre.

The 24th edition of the European Performing Arts Festival - Romanian Drama Festival focuses on performances based on new theatrical texts. The festival is a relevant inventory of the Romanian dramas presented last year. In addition, it reinforces the identity of the National Theatre of Timişoara, as they believe the theatre is a mode of gaining self-knowledge within the community and a catalyst for positive and creative energies and, last but not least, a venue for spiritual, intellectual and social development.

“The actors speak this acting language exceptionally well; I have found Miklós Bács especially surprising in the role of the doctor and father, never seeing anything remotely resembling such a portrayal in his entire career. Ferenc Sinkó, Anikó Pethő, Enikő Györgyjakab, Csaba Marosán, Éva Imre and the rarely seen Tekla Tordai – are all great. Their coexistence is implicit, effortless. Sometimes they give the impression of improvisation, although there is no way to achieve that if the film and the stage have to constantly be synchronized. It's so lifelike that one cannot possibly get tired of it.” - writes theatre critic Andrea Tompa about the performance.