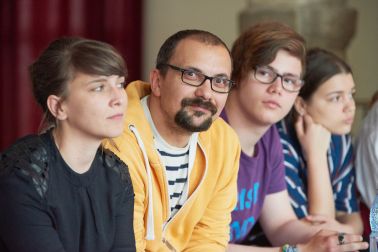 DIGITAL NATIVES ON THE STAGE OF THE HUNGARIAN THEATRE OF CLUJ

Led by actor Ferenc Sinkó, the next production of the Hungarian Theatre of Cluj is a project initiated by L’Union des Théâtres de l'Europe (UTE) and supported by the EU’s Creative Europe program, entitled Digital Natives, where 9th, 10th and 11th graders are the ones on stage. The premiere of Jordan Tannahill’s Concord Floral, which was the basis of the production, will take place on Saturday, May 18, at 8 pm, in the Studio Hall.

5 UTE member theatres from 5 different countries participated in the project: Vienna Volkstheater (Austria), Comédie de Reims (France), Schauspiel of Cologne (Germany), Thessaloniki National Theatre of Northern Greece (Greece) and the Hungarian Theatre of Cluj. “In this so-called digital world, the goal of the project is basically to talk to and to address topics regarding our digital existence precisely with those people who have been born into this digital world, since these young people who are between the ages of 15 and 18 were almost born with a smart phone in their hands. The project has had and continues to have several stages. The member theatres created their performances at different times, and during their respective premieres conferences were also organized regarding the project, where sociologists, psychologists, theatre professionals and university lecturers gave allocutions on the subject of digitalisation” – said Zoltán Csép, the theatre’s programme director.

The project ends on June 1, 2019 with a Digital Night Festival, where the five countries’ participants share their experiences concerning the project through live webcasts and celebrate together.

Led by young theatre professionals, the fourteen high school students participating in the project learn about the language of the theatre and the topic of digitalisation through the digital habits of their own lives, while at the same time performing the Concord Floral youth drama written by Jordan Tannahill.

Concord Floral brings together 14 young high school students who meet in an abandoned greenhouse, where everyone shares their own story. The text of the play, written in a cinematic manner, addresses young people using their own language, exploring different topics such as friendship, addiction, love, responsibility, sexuality, guilt, community life, and alienation.

Concord Floral is director Ferenc Sinkó’s first production based on an already written text which he had to adapt. “We started on this journey with fourteen teenagers. The entire creative process has been a new experience for everyone. The participants have adapted to one another, referring to both the creators and the youngsters alike. In fact, the thing that motivated me most was my curiosity regarding the kids. Every day I discover new things in them. It is a wonderful gift to have been able to and continue to be together. There was no need to use any strategy to understand each other, no need for any parental intervention during rehearsals whatsoever. I feel that we have found a common voice by which everyone can express their feelings using their own language and their own specific accents” – stated the director.

Schedule of subsequent performances: Sunday, May 19 and Sunday, June 2 at 8 pm.

Tickets can be purchased from the theatre’s ticket office or online at www.biletmaster.ro.