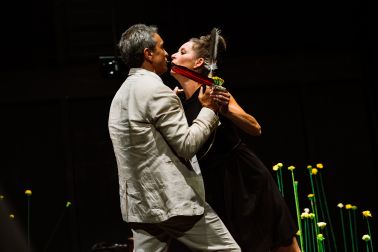 On April 11, the Day of Hungarian Poetry, at 7 pm, in the Studio Hall, audiences will once again be able to enjoy the joint production of the Gyula Castle Theatre, the Transformation Foundation, and Spectrum Theatre, entitled The World of Two Moons, directed by Zsolt Bogdán.

The performance scheduled for the Day of Hungarian Poetry is also meant as a tribute to Ágnes Nemes Nagy, on the occasion of the 100th anniversary of her birth.

The poet Ágnes Nemes Nagy was a leading and decisive figure of Hungarian literature after the Second World War. Balázs Lengyel was a writer, essayist and literary organizer, and the most important critic of the Újhold magazine. Their destinies were inextricably intertwined, and despite the fact that their marriage ended in divorce, their intellectual community and friendship remained unbroken. Their lives included vocal resistance and then silent survival during the dictatorship, war and prison camps, and also exclusion, rescuing and hiding the persecuted after the euphoria of the "three years of literature"...

The production is an intertwining of diaries, letters, interviews, essays, and poems. The exceptional relationship between two people, and their relationship to the world, the stages of their life, rich in turns, portrayed by two great actors, Kriszta Szorcsik and Zsolt Bogdán: "As Ágnes Nemes Nagy is swept away by the 'real, but genuinely real sand of the Sahara Desert’, taking her into the time before Christ, to Pharaoh Akhenaten, to Balázs Lengyel, to whom she is "bound by tender threads", reading his poems, the body and the soul are weakened by the threads, by the play, by beauty, by the touch of unknown angels, by the fragrance of the Transylvanian batul apple, at the bottom of the hay stack, until finally they dissolve in the great Unknown, in the journey... in the ups and downs, and the ins and outs. All this happens at the same time, "in the same valley, in the same spot together"... Our thirst for beauty, our search for beauty, has thus become part of a single encounter. We have become "one and not a One" through his poems throughout time. Join us."

Tickets for The World of Two Moons are available at the theatre’s box office and online at www.biletmaster.ro.