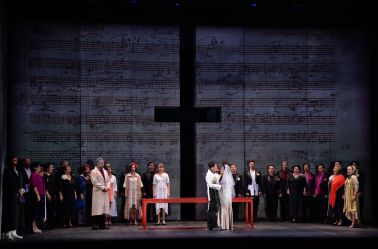 Organized by the National Theatre of Northern Greece (NTNG), the International Forest Festival will take place between September 10-20, 2021. On account of the global pandemic, the organizers decided to hold the festival’s 3rd edition in an online format. The Union des Théâtres de l'Europe (UTE) joined the theatrical event organized by the Thessaloniki Theatre, therefore, the 19th edition of UTE’s Festival has been included within the International Forest Festival.

Alongside the rich and varied program of the International Forest Festival, starting with September 13, 2021, 8 performances created either by UTE member theatres or individual members will be broadcast. Staged by Gábor Tompa for the Hungarian Opera of Cluj in October 2020, The Magic Flute will be available on September 15, at 8 am.

On September 17, 2021, starting at 8 pm, a roundtable discussion will be broadcast online, an event led by Gábor Tompa, President of UTE.

The detailed program of the festival is available on the following website: on.ntng.gr. Performances and talks are scheduled according to Eastern European (EET) time and are available for free for 48 hours on the NTNG’s YouTube channel.