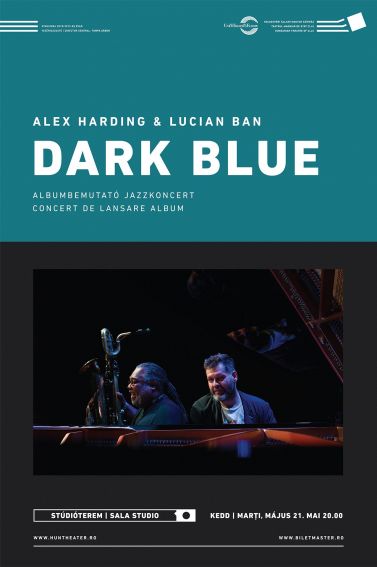 American Alex Harding, considered to be one of the greatest jazz baritone saxophonists of our time, presents his latest album DARK BLUE, featuring Lucian Ban, the Romanian-born pianist from New York.

For almost two decades, Alex Harding has been playing jazz with Lucian Ban, a pianist who moved to New York in the late 1990s. During this time, they founded several ensembles, released numerous albums under their own names, and performed hundreds of concerts on both sides of the Atlantic. Their bands - the Lumination Ensemble, the Lucian Ban & Alex Harding Quintet, the Tuba Project, the Somethin' Holy duet – have achieved both popular and critical acclaim. In 2003, the Alex Harding & Lucian Ban Quintet and their guest, the famous drummer Barry Altschul, were awarded the Best Show of The Year Award by the All About Jazz NYC magazine, a prize previously received by such legends as Joe Lovano and Cecil Taylor. In 2006, Alex Harding and Lucian Ban founded the Tuba Project, starring Bob Stewart, the great American jazz tuba player. In 2009, Alex Harding collaborated with Sam Newsome and Lucian Ban on his The Romanian-American Jazz Suite album.

From avant-garde blues to free ballads, which evoke the sounds of Archie Shepp and Sun Ra, from spontaneous improvisations to original pieces, DARK BLUE is an artistically mature work of a duo made up of two artists who communicate with each other perfectly using the language of modern jazz.