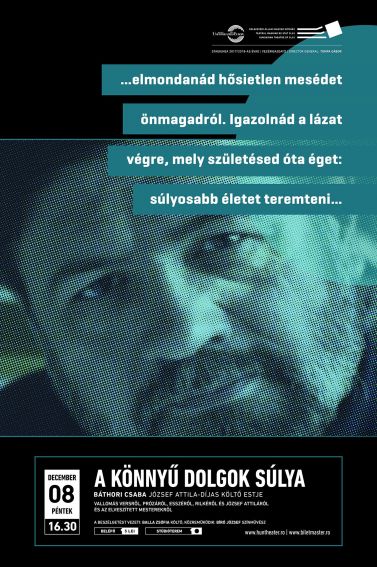 THE HEAVINESS OF LIGHTER THINGS

The topics approached will focus on poetry, prose, essays, Rilke, József Attila, and the lost masters of the craft.

Csaba Báthori (1956-) began his career at the end of the 1970s at the Mozgó Világ magazine. Since then, he has created seminal works not only in the field of poetry, prose, and essay (such as the volume of verses published recently, entitled Melankólia), but has also left a deep mark with his rich contribution to the field of literary translation.

During the event, he will talk about his classical masters, such as Ágnes Nemes Nagy, Iván Mándy or István Jelenits, but also about why he emigrated to Austria, how he remained faithful to the Hungarian language and his poetic ideals there, and why he came home in the mid-1990s. We will also ask him whether we can preserve our mother tongue in a foreign language environment? What does Hungarian poetry look like from abroad? What experiences accompany "quitting", and returning home? Is Hungarian Literature really a "quintuple flute"? How many motherlands mean one true motherland? How many languages are there within that only true mother tongue? Is Europe "sloping" to the east, and what does that mean? Are we acquainted with each other within and outside of our borders?

The evening will include not only the works of Csaba Báthori, but also the works of poets and writers whom Báthori often translated. Since he is today one of the foremost authorities in Hungary concerning Rainer Maria Rilke, the figure of the great German-Austrian poet will also be addressed, our audiences being able to hear a wonderful text by this important author.

The conversation is conducted by poet Zsófia Balla.