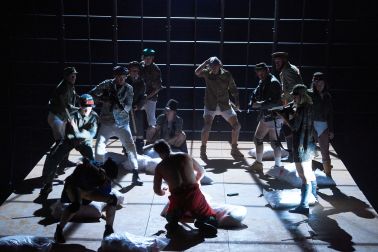 The Hungarian Theatre of Cluj will present its premiere of Bertold Brecht and Paul Desssau’s Mother Courage and Her Children, staged by Armin Petras, on Tuesday, November 19, at 7 pm, a performance that will also officially open the UTE Fest, the 18th edition of the Union des Théâtres de l’Europe Festival.

Mother Courage and Her Children is a result of an international co-production of the Hungarian Theatre of Cluj and Staatsschauspiel Dresden, with the Dresden staging having had its premiere at the end of September.

During the press conference preceding the premiere, programme director Zoltán Csép asked the creators about the upcoming performance.

Armin Petras highlighted the differences between the German and the Hungarian theatrical traditions, which resulted in an exciting rehearsal process. At the same time, he thought it important to emphasize the role of the choir made up of actors and acting students: “The easily recognizable characters are on stage, however, the others, the crowd that is rushing on stage, they represent the epitome of war. It was a very short and intense work process, but I am happy, because the idea seems to work. The war is not only waged by politicians, there is war on the Internet or across cultures as well, so Brecht's text is still very much relevant.”

The show's costume designer, Cinzia Fossati, strived to create abstract costumes that are not specific to a certain era, but appropriately support the unstable, warlike atmosphere of the production.

Júlia Laczó, who stars in the title role, said the following on the role of Mother Courage: “To play Mother Courage is a huge challenge. She is a strong woman, is smart, and is a very good businesswoman. The kind of woman who could never express her love, except with a slap in the face, at the most. She does nothing by accident, she plans everything, and so precisely and meticulously, that she does not even notice that she is losing her children in the process. Whatever she does, due to her strength and toughness, not only does she harm herself, but her own children as well.”

Tickets for the premiere and additional performances of Mother Courage and Her Children can be purchased at the theatre’s ticket office and online at www.biletmaster.ro.
Copyright © 2020 Hungarian Theatre of Cluj. All rights reserved