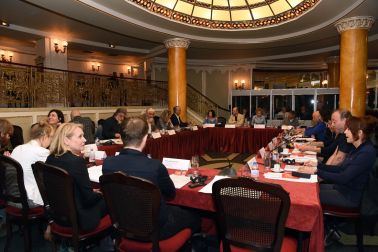 At the General Assembly of the Union des Théâtres de l’Europe (UTE) organized last weekend at the Vígszínház in Budapest, Gábor Tompa, the Artistic and Managing Director of the Hungarian Theatre of Cluj, has been elected as the president of the international organization. Gábor Tompa has taken over the presidency from the former Artistic Director of the Prague National Theatre, Michal Dočekal.

Gábor Tompa said that as the president of UTE, the umbrella organization that unites Europe's most prestigious theatre companies and artists, his goal will be to establish a connection between old and new values, while also strengthening the reputation and worldwide recognition of the organization. In addition, he would like to reintroduce the annual theatre festival organized by the UTE, the last edition of which was held in 2008, by the Bulandra Theater and the Hungarian Theatre of Cluj. Moreover, he believes that it is also important to organize regular summer schools, artistic exchange programs, and to further foster and encourage co-operation between member theatres.

The Union des Théâtres de l’Europe has nearly 40 members. It was founded in 1990 by French Minister of Culture Jack Lang and Giorgio Strehler, director of the Piccolo Teatro in Milan. The organization establishes sustainable forms of international collaboration in ground-breaking projects that offer a critical reflection of today’s society. Among the past presidents of the theatrical organization was Gábor Zsámbéki, who led the UTE after Strehler's death until 2004, as well as Alexandru Darie, the director of the Bulandra Theater in Bucharest, and Israeli director Ilan Ronen, former manager of the Habimah Theatre.