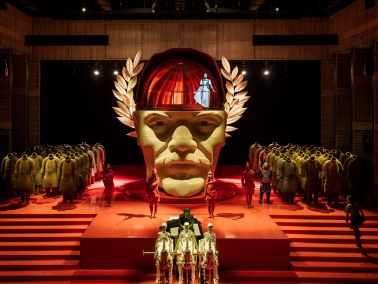 On Saturday, November 28, at 12 noon, the Interferences virtual stage presents Stanislavsky Electrotheatre’s production of Octavia. Trepanation, an opera composed by Dmitri Kourliandski and directed by Boris Yukhananov. The opera was created in the year of the centenary of the Russian Revolution, in response to the need to reflect on the nature of power, violence, and tyranny thoughout the ages.

The performance will be available until November 28, at 8 pm.

At 5 pm, the UTE30 section will feature Cheek by Jowl’s The Winter’s Tale, directed by Declan Donnellan.

The Winter’s Tale tells the story of a delusional and paranoid king who tears his family apart. But this is the new Shakespeare, after he completed his great tragedies, and the tough struggle for redemption yields flickers of hope. Initial darkness gives way to joy as Time leads the characters to a shattering conclusion...

The performance is available for 24 hours.

In the OFF section, the one-man show of Piotr Kondrat entitled Shakespeare’s Night will be available on the Festival’s Facebook page from 6 pm. During his 30-year theatre and film career, Piotr Kondrat has played no less than 111 roles, collaborated with 10 Polish theatres, and worked with several Shakespeare festivals around the world. In Romania, he presented 3 of his Shakespeare performances at the Shakespeare Festival in Craiova.

The performance will be accesible for 24 hours.

In the Horizons section, at 8 pm you can enjoy the performance Rhinoceros, directed by Gábor Tompa, and produced by the Mihai Eminescu National Theatre of Timişoara. The performance revolves around a terrible illness that coerces people to decide: will they follow the masses of remain an individual.

“Bérenger is an ordinary man who lives in a place that could be anywhere and, starting with the 20th century, anytime. His story begins when the city is hit by a new epidemic: people turn into rhinoceroses. For some, it comes as a natural inclination that is accepted with awe, for others, a choice, and for very few – a categorical rejection.” - wrote Codruța Popov about the performance.

On Sunday, November 29, the first performance at 12 noon will be the production of Bury Me Behind the Baseboard, based on the work of Pavel Sanaev, directed by Dumitru Acriș.

The space of the performance - is just like a torn tablecloth set on the family table, where everyone pulls the child towards them, forgetting about the child himself. In this context, the director has created a world where the little boy is placed outside of our line of sight, outside the walls of the home that has been turned upside down. All we hear is that he's playing in his room at one moment, while in the next he is hiding somewhere, away from his parents' fight.

The performance will be available until November 29, at 8 pm.

In the UTE30 section, at 5 pm the broadcast of Füst Milán's Catullus, directed by Gábor Székely in 1987 at the Katona József Theatre of Budapest, will become available.

Indeed, Milán Füst did not write a biographical or a historical play. He was mostly interested in the painful and cruel love which is central also in Catullus' poems: Catullus was the first poet to describe his love not only as a godess, but also as a torturing demon or beast, whom he loves and hates at the same time. The central theme of the play is passion, torturing love-games and the inscrutability of the human soul.

The performance will be accesible for 24 hours.

With a “breathtaking reassessment” (Financial Times) of Berg’s monumental opera Wozzeck, universal artist William Kentridge, who already made headlines with his stagings of The Nose and Lulu, debuts at the Salzburg Festival. The cast is headed by Matthias Goerne, one of the leading baritones of our time, accompanied by Lithuanian star soprano Asmik Grigorian as his lover Marie.

The actors’ band Loose Neckties Society will close the 7th Interferences International Theatre Festival, as their concert will be livestreamed from the theatre’s main hall on the festival’s Facebook page, on Sunday at 9 pm.

All performances are available free of charge at http://www.interferences-huntheater.ro, while the OFF section will be broadcast on the festival’s Facebook page (www.facebook.com/Interferences.Festival).