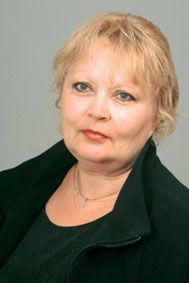 Julia, Chairman of the Opera Guild - Ken Ludwig: Lend Me a Tenor, directed by Peter Bokor