directed by
Michal Dočekal dramaturg
András Visky set design
Martin Chocholoušek costume design
Zuzana Bambušek music composed by
Ivan Acher video images
Zsolt Kerekes director's assistant
László Szabó G. director's assistant
Gábor Viola director's and dramaturg's assistant
Katalin Deák stage manager
Zsolt Györffy
What is destroyed is the hope resulting from naïveté. (...) A terribly overwhelming, but very exciting performance awaits audiences at the Hungarian Theatre of Cluj: Amerika, based on Kafka’s novel of the same title, directed by Michal Dočekal (the artistic director of Prague National Theatre). When one thinks of Kafka, one thinks of power, of the hopelessness of the ordinary person and a particular concept associated to space (as evidenced also in his novels The Trial, The Castle, The Metamorphosis). These themes are present also within the play, however, the usual tragic ending of his works seem to be absent from the staging.
Borbála Gergely: A hatalom tekintete – Amerika [Amerika - The Gaze of Power], transindex.ro, December 3, 2015
The Cluj production of the play makes it obvious that the Kafkaesque content, themes, messages are firmly directed to our contemporary existence. The oddity of this updated approach lies precisely in the natural ease with which the literary material from the beginning of the 20th century submits itself to contemporary interpretations, almost offering it to portray the topical context of the day. What is the reason behind this, you ask? Well, for example, because we can easily picture any young person of our days going through the story Kafka depicted, when such a person goes through precisely these types of atrocities experiencing the life of a migrant, arriving in a strange environment armed with exactly these kinds of stereotypes, and just like Karl, he disappears forever among the dreamlike fantasies of a better existence. Undoubtedly, this is what makes Franz Kafka relevant also in the 21st century. (...) Still, the undeniable engine behind the continuous magic provided by the performance lies within the fascinating chameleonic portrayals carried out by the actors. Even Shakespeare himself would be envious to watch the „metamorphosis”-like bravados in a Kafkaesque sense, the journeys from one role to the other carried out - no only as an ensemble, but also on an individual level - by the actors of the Cluj production, continuously serving that shared magic created so masterfully by Michal Dočekal.
Réka Bartha: Amerika: a hely, amelyet megálmodtunk? [Amerika: The Land of Our Dreams?], Erdélyi Riport, November 29, 2015
From a contemporary perspective, Kafka’s Amerika is a somewhat utopian imaginary territory, resembling Europe more than „the New World”, onto where the illusions and anxieties of an entire generation are projected. Amerika is the territory where desperate immigrants are arriving from all corners of the world (sounds familiar, doesn’t it?), of dreams (some fulfilled, others ruined), it is in a word a transparent metaphor of modern society. Karl Rossmann confrunts ethnic intolerance, chauvinism and nationalism. Ultimately, Karl Rossman is each and every one of us! (...) The stage adaptation, signed by the director alongside Iva Klestilová, starts from the assumption that in order to be convincing for a 21st century audience, the century old text has to be completed with new situations and lines, and the characters, especially Karl Rossmann, interpreted in a way as to suggest their contemporary existence. This is the reason why a rich complementary material is inserted within the performance from the author’s other writings as well as other authors’ texts... Thus, a number of segments became part of the adaptation, namely excerpts from the novella „In The Penal Colony”, lines from the novel „The Trial”, fragments from the poem „The Wish To Be a Red Indian”, a few Kafkaesque aphorisms, the poem-manifesto „Life in Prague” of Czech writer and philosopher Egon Bondy (whose texts were circulated during communism in the form of samizdat), and even fragments of a speech held by Václav Klaus in 2002, at the election assembly of the Civic Democratic Party.
Radu Constantinescu: Franz Kafka şi iluzia americană [Franz Kafka and the American Illusion], Ziarul Financiar, December 10, 2015
One of the increasingly tempting scenographic options is the opening of the perspective towards the backstage area: the proximity to walls, stairs and its niches place the viewer in a less univocal architectural horizon, an obviously unfinished one - appropriate, in this case, to intensify the contradiction between the exterior with its „metal cage aspect” and a comfortable intimacy, as Kafka’s hero characterized American habitation. Any possible lair becomes, subtly, a cage for the wandering Karl, which gradually empties the meaning of freedom’s virtues. Such a scenographic approach offers even more concrete expressive opportunities: the gigantic nature of transatlanticism - an arc of salvation or of damnation, not merely that of changes in the climate - and its technical viscera - the pipes of the underground maze or the smoke coming from the hot boilers, corresponding to the destabilizing indistinctions. A recomposed labyrinth, this time only by the fragments of video surveillance - the internalization is, in fact, a reconstruction of disparate impressions. Also featured in this dynamic of inversion, the out-in-the-open latrine takes privacy and lowers it to the level of street derision. Karl - Balázs Bodolai gives the character a touch of resistant vulnerability - gradually loses all refuge - since the self is relational, his identity disappears when his ties are so radically compromised.
Cătălin Bogdan: Isprăvi picarești cu dispariție transcendentală [Picaresque Exploits of Transcendental Extinction], Revista22, March 8, 2016
Michal Dočekal treats the text in a creative and purposefully dynamic way, transferring it onto stage under the sign of hyper-realism. Starting from a realist perspective and by crescendo reaching a nightmare. With increasingly emphasized detailed, becoming more significant as the story of young Karl Rossmann - a truly complex role, a difficult professional milestone reached marvelously by the excellent actor Balázs Bodolai - takes on increasingly unnatural, frightful, strange aspects. Nighmarish ones. What happens to young Karl is a dark dream, experienced with open eyes.
Mircea Morariu: Pământul făgăduinței [The Promised Land], Adevărul, December 10, 2015
Budapest, Hungary (2016)
Date of the opening: november 02, 2015

I recommend the performance to playwright, poet and director Jan Antonin Pitínský , who has recently celebrated his 60th birthday, and whose production of Amerika in the middle of the eighties was a defining experience for me.

Jan Grossmann, the famous Czech literary historian and theatre director quotes from The Trial in his essay Kafka and the Theatre:

“‘That's the law. ... ’ ‘I don't know this law,’ said K.  ... ‘Look at this, Willem, he admits he doesn't know the law and at the same time insists he's innocent.’”  Grossmann adds: “Kafka is the first poet of the modern automatized world. Automatism prioritises the form rather than the content.”

We are Karl Rossmann. Twenty five years ago we, like Karl, were enthusiastic to leave behind the communist system and step into the free world. However, we soon recognized the borders, labyrinths and dangers of the so much desired “America”. We need to answer the inevitable question: aren't we responsible for the failures and disappointments that we have experienced during the past quarter of a century? If this is how we read Kafka, we might get closer to the spirit of the novel’s stage adaptation.

We witness Karl Rossmann’s encounter with national hatred, social injustice, the world of money and power, and the world of the unemployed and homeless. At the end he himself becomes a slave of the new world, because the mechanism of money and sex represented by Brunelda, the singer, captures him too. He is confronted with the cold rejection of our society, expressed by the Student: “Give up all hope!” The way indicated to Karl by his Uncle, that is both punishment and experience, ends at the Natural Theatre of Oklahoma, and this world theatre is, in a sense, a metaphor for eternity.

The ending of the novel is open: we can consider America to be a world of automatized and instrumentalized human relationships (as Chaplin stated in Modern Times with brilliant wit), but also as a dream-world, a world where human freedom needs to rise above the horizon like an unconquerable Indian warrior who overcomes a (maybe lost) battle. 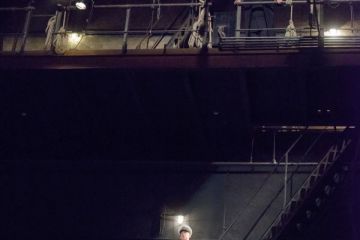 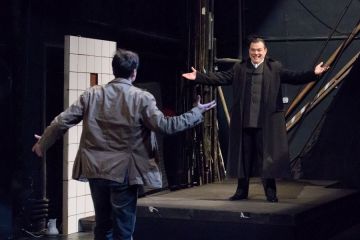 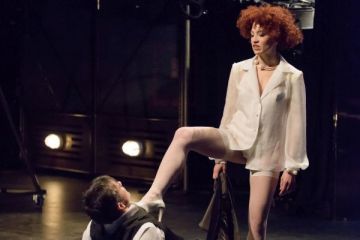 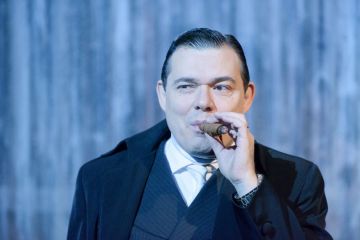 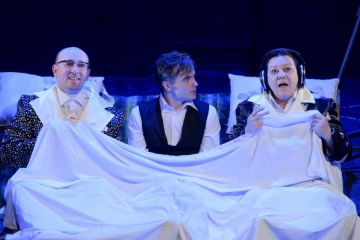 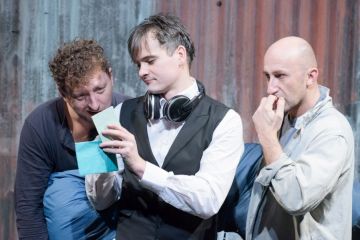 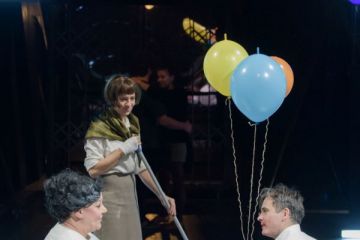 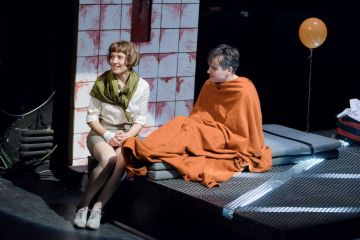 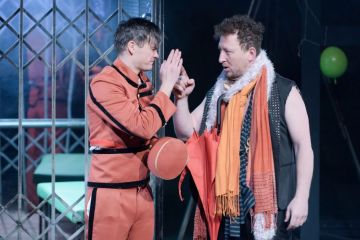 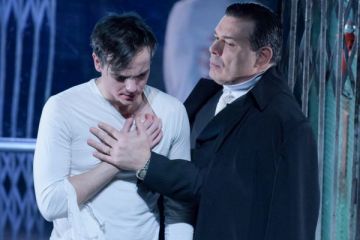 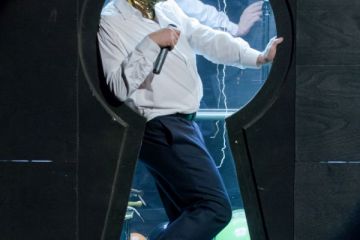 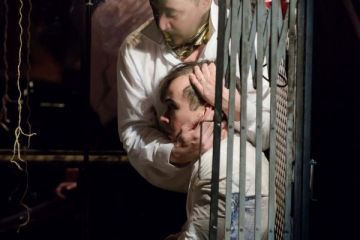 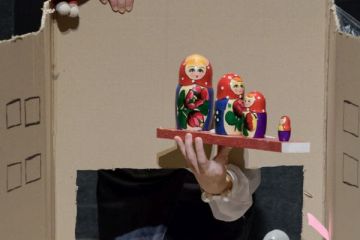 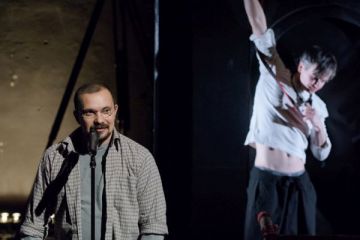 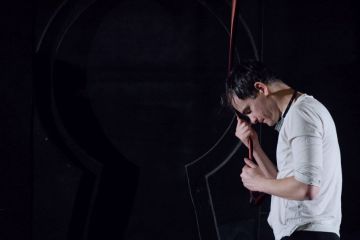