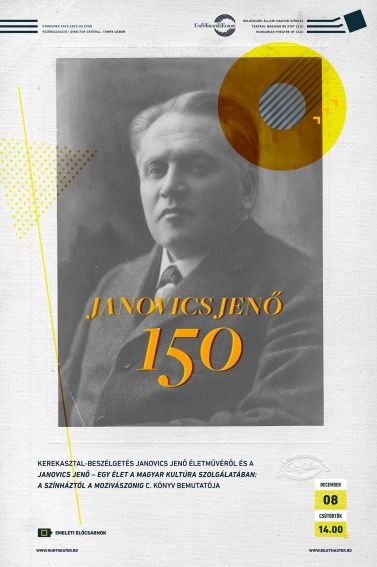 On the occasion of the 150th anniversary of the birth of Jenő Janovics, a roundtable discussion will take place on Thursday, December 8, at 2 pm in the upstairs lobby of the Hungarian Theatre of Cluj. The round table discussion will be an opportunity to commemorate the life and significant work of Jenő Janovics and to present the book Jenő Janovics - A Life in the Service of Hungarian Culture, from Theatre to Screen. The event will be hosted by Gábor Tompa, with the participation of Katalin Ágnes Bartha, Bálint Zágoni, Erzsébet Zakariás Salat, and Szilárd Ferenczi.

"(...) The aim of this book is to help make Jenő Janovics better known in Hungary, as "his achievements rightly elevate him to one of the greatest Central European cultural organizers of all time, who served the cause of Hungarian culture from the theatre to the screen with tireless diligence and exemplary humility" - Dr. Tamás Kollarik, author-editor and Dr. Sándor Takó, publisher.

The book was edited by Dr. Tamás Kollarik and Bálint Zágoni, and published by Dr. Sándor Takó.

"Jenő Janovics was one of the most distinctive personalities in the history of the Hungarian Theatre of Cluj. In addition to his outstanding work as an actor and director, he was the director of the theatre for 28 years. At the beginning of his directorship, Cluj was enriched with two theatre buildings: the Hunyadi Square Theatre was inaugurated in 1906, and in 1910 the promenade theatre building, the second and third home of Hungarian Theatre of Cluj. He also successfully applied his talents in the field of film production: he was the pioneer of Hungarian silent film production in Transylvania. In 1913, he shot the first silent film in Cluj, and by 1920 he had produced over fifty films. He was also a scriptwriter, director and film actor, as well as a stage director, actor, critic, theatre historian and theatre theorist with a thoroughly modern approach to theatre administration and highly successful in the field of theatre organization. Throughout his life, as in the life of all creative and innovative people, he has had his ups and downs." - excerpt from the book, written by Erzsébet Zakariás.

The event is open to the public, no prior registration is required.