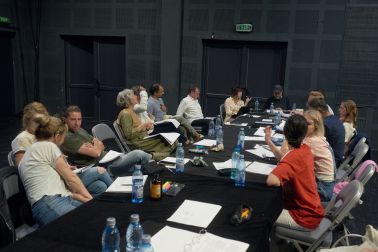 The rehearsals of the staging of PROMETHEUS'22 directed by Gábor Tompa have begun at the Hungarian Theatre of Cluj. Based on the tragedy of Prometheus Bound by Aeschylus, the performance  is a joint production of the Hungarian Theatre of Cluj, the State Theatre of Constanţa and SNT Drama Ljublajana. The production, which is part of the European Theatre Union Catastrophe project, will premiere in Hungarian, Romanian, Slovenian, and English on July 1, 2022 in the Main Hall of the Hungarian Theatre of Cluj, followed by premieres in Ljubljana in October, and in Constanţa in December 2022. PROMETHEUS'22 will return to Cluj-Napoca in November for the Interferences International Theatre Festival, but will also be shown in Porto in February 2023 at the Finisterra Festival, organised by the São João National Theatre and Union of European Theatres.

Following the July 1st premiere, PROMETHEUS'22 will be presented also on July 2 and 3. Tickets for the performances can be purchased at the theatre's ticket office (weekdays between 10 am and 2 pm) and online at www.biletmaster.ro.

The aim of the Catastrophe project of the European Theatre Union/ Union des Théâtres de l'Europe (UTE) is to reaffirm the mission of the theatre alliance created in 1990 by Jack Lang and Giorgio Strehler: "to build the European Union using the instruments culture and theatre, to promote a collective cultural movement that transcends linguistic barriers in order to create an artistic theatre that is seen as a driving force towards building friendship between peoples".

The global shock of the Covid-19 pandemic in 2020 has completely disrupted our daily lives and paralysed entire social, cultural, and economic sectors. It is a catastrophe, both in the sense we experience it today and in the original sense of the word - the Greek katastrophé denotes a sudden change or a major upheaval in the way things are. The aim of the project, initiated by UTE member theatres and partners, is to look at the great upheaval caused by the pandemic from a new perspective, with the further intention of reaffirming the role of theatre as a cohesive element that can provide a space for reflection in a divided Europe.

The collaboration between the theatres will result in 7 co-productions based on the themes of ancient Greek tragedies. These themes, which are not only performing arts but also a kind of Esperanto of European existence, are the starting point for the formulation of a joint creative strategy of post-pandemic Europe, through the creation of new dramatic and theatrical works.