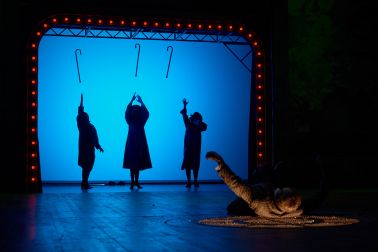 Eugène Ionesco's absurdist drama Macbett, directed by Silviu Purcărete, will be presented at the 13th International Shakespeare Theatre Festival in Craiova. The production will be performed on Tuesday May 24, at 8 pm, in the Amza Pellea Hall of the Marin Sorescu National Theatre of Craiova. The production has been nominated for an award in the 2021 Best Direction category by the Romanian Theatre Association (UNITER).

"The clear set, strongly underlined by the striking red of the curtains and Helmut Stürmer's stage lights, as well as the extremely inspired and suggestive costumes by Lia Manțoc, and the music composed by Vasile Șirli that emphasizes, accompanies and increases the tension of the scenes, brought us the joy of a high-class artistic performance, a Silviu Purcărete brand." - wrote critic Roxana Croitoru in the theatre magazine Teatrul Azi.

Tickets for Macbett's guest performance in Craiova can be purchased at the ticket office of the Marin Sorescu National Theatre or online at www.ebilet.tncms.ro.