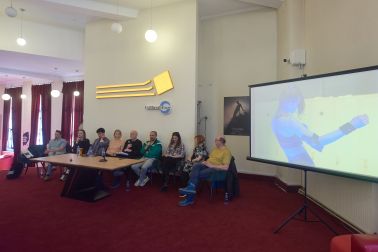 On Thursday, March 31, at 8 pm, at the Studio Hall, the Hungarian Theatre of Cluj will premiere Seymour – I’m Only Here by Accident, a drama by contemporary German author Anne Lepper, directed by Ferenc Sinkó.

Anne Lepper's story is about five overweight children who are locked up in an institution in the mountains. The absent Dr. Bärfuss has set up precise rules for their "regimen" that will help the little ones lose weight and perhaps become real people again. They are all hoping for the arrival of the doctor who will certify the success of the cure and finally allow them to go home.

András Visky, speaking at the press conference held prior to the premiere, said that he was delighted with the choice of play, as Anne Lepper's text deals with the problems of today's society and does so in a very poetic way.

Commenting on the choice of play, Ferenc Sinkó said the following: “The text, which also had a prior table-read version, was ‘love at first listen’. That was six years ago, and I've been thinking ever since that I'd like to stage it if I get the chance. The situation in the play is that there are five fat children who have been taken to a mountain sanatorium by their parents and are locked up there. They have time to think and talk. My first thought was how to convert this situation and the text so that it's not about physical fatness, but about everyone finding their own 'fatness', which they would like to shed."

András Visky added: "This is about a perspective, not a physical condition. We can all find ourselves in this performance."

On what it was like working with the creators, the director stated: “It’s the 4th time I have been working with Zsófi Gábor. We are on the same page, we can think in the same direction. Mihai Păcurar, the set designer, is an old friend of mine, but we hadn't yet worked together. I knew his visual world and it might be a bit denser than mine, but that was the challenge. With Danaga (Daniel Aga), the composer, this is our second project, he's a DJ and has recently started to flirt with creating theatre music. His work is very important in creating the atmosphere of the performance. I think the Seymour is more of a mood performance - or I hope - where the What? Why? I don't get it. sentences take a back seat and we let the mood sweep you along."

Attila Orbán, who plays the role of Sebastian in the production, added: "The play is about the cult of the body, but somewhere it is the soul that suffers. We are constantly trying to place our bodies somewhere, and the soul, which remains invisible, is not dealt with. The soul suffers enough through the torment of the body."

The performance is directed by Ferenc Sinkó. The co-creators of the production are: Noémi Vajna, dramaturg, Mihai Păcurar, set designer, Zsófia Gábor, costume designer, composer Danaga, and Balázs Bodolai, collaborator of the director.

Tickets for the premiere of Seymour – I’m Only Here by Accident and subsequent performances can be purchased at the theatre's ticket office (weekdays between 10 am and 2 pm) and online at www.biletmaster.ro.