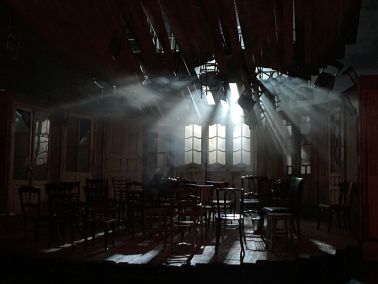 GÁBOR TOMPA DIRECTS THE CHAIRS AT THE LUXEMBOURG NATIONAL THEATRE

On Tuesday, March 29, the absurdist drama The Chairs by Eugène Ionesco, directed by Gábor Tompa, will be presented at the Luxembourg National Theatre.

"OLD MAN: Your Majesty, we have no more wishes in life. We are glorified, and may as well die. Thank God for having given us such long and peaceful years... It was worth living. I have fulfilled my mission. I have not lived in vain, my message is known to the world... The world, or at least what is left of it!"

In 1961, Bertrand Poirot-Delpech called this play "the most complete of modern tragedies". Ionesco's third play, written in 1952, is now an undisputed success. The theme of The Chairs is, as the author says, 'ontological emptiness': but it is also a personal drama, a mirror of conscience. In it we find the nostalgia of childhood, the sense of guilt, the horror of old age and death. It is also a comedy that often makes us laugh with its farces, puns, parodies and pirouettes. It's a ballet: a ballet of chairs piled up in the accelerated motion of a fantastic vortex that remains empty.

The production is designed by Dragoș Buhagiar, with music and sound effects by René Nuss and dramaturgy by Florian Hirsch.

Good luck to everyone on the premiere!