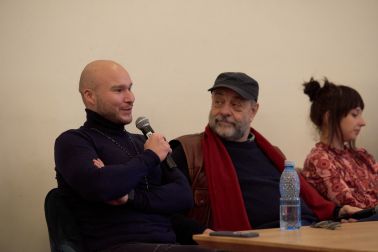 The first premiere of 2022 will take place on Saturday, January 8, at 7 pm, in the Main Hall of the Hungarian Theatre of Cluj. The production that is directed by Botond Nagy is entitled Journey by Moonlight, and it is based on the novel by the same name by Antal Szerb. The text adaptation is written by Ágnes Kali and Botond Nagy. While the rehearsals for the production were held in 2021, the restrictions regarding the epidemic prevented the production from being premiered to audiences.

Botond Nagy, the director of the production, said of his relationship with the novel: "It is a work that has allowed me to be more open, more vulnerable, more emotional, and to also maintain a certain distance. It was the first time that I had the opportunity to work on a production not only as a director, but also on the adaptation with the dramaturg Ágnes Kali. The presence of Antal Szerb is very important, it's a text, a work that needs to be handled with care as a creator."

The director also noted that it is exciting to return to the production after all this time, a staging that is still evolving and changing, and that he is curious to see how the audience in Cluj will receive the performance. He added that he could only imagine creating the production in Romania at the Hungarian Theatre of Cluj.

Balázs Bodolai, who portrays the main character of Mihály, said the following regarding his relationship with the role: "This role was a very powerful encounter for me, because I discovered a character who is not necessarily a positive one. Mihály is a man who somehow can't get away from his past, that is, he can't live in the present. Something is keeping him continuously in the past, so nostalgia comes across as a negative element; not something that causes problems in the present, but something that causes pain. The word nostalgia itself comes from the Greek words nostos and algos, meaning past and pain. The pain is caused by the fact that the past is gone, but there is a longing for something that no longer exists. And this, of course, comes at a very high price. The price is that you can't be in the present until you can get away from your past. So in a sense the novel begins with a failure. The failure of the protagonist to embark in the present on a path that he has chosen but in which he cannot participate, so he turns inwards and towards the past, and this failure launches another path."

Tickets for the premiere of Journey by Moondlight, as well as subsequent performances scheduled for January 12 and 21, can be purchased at the theatre's ticket office (weekdays between 10 am and 2 pm) or online at www.biletmaster.ro.