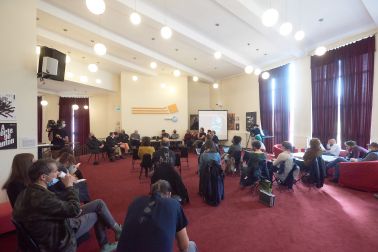 The Hungarian Theatre of Cluj premieres Ionesco’s Macbett, directed by Silviu Purcărete, on Wednesday, October 13, at 7 pm, in the theatre’s Main Hall.

Silviu Purcărete is returning to work with the Cluj company for the fifth time, having previously staged the highly successful performances of Pantagruel's Sister-in-law, Gianni Schicchi, Victor, or Power to the Children, and Julius Caesar.

When asked for the reasons why he chose to stage this particular play, the director said he considers it inappropriate to classify Ionesco as an absurd author, as his dramaturgy is very poetic and modern, in fact his is a new way of writing about tragic situations in which he mixes tragedy with comedy. The situations are extremely paradoxical, as is this way of thinking, but if it were absurd, we would be talking about chaos, yet this text uses a precisely structured, poetic theatrical language.

Concerning the musicality of the play and the performance, composer Vasile Șirli said that there are clear references to an operatic expression in Ionesco’s text. They created a universe of sound, characterized by vocal segments, instrumental parts, and sound effects that also mirror the rhythm of the performance. Through the character and rhythm of the text, the necessity of creating a 20th century world, and a very well-defined musical world has become apparent.

“I think Ionesco’s piece requires the kind of symmetry that is present in the performance. This Shakespeare-like theatre is wrapped in a poetic cabaret. We placed the emphasis on Brecht’s distancing, which was very characteristic of the 1920s and which allows us to get closer while at the same time distance ourselves from what transpires on stage. We easily arrive from a tragic scene to a hilarious, satirical, and comic scene." - stated Helmut Stürmer, the production's set designer.

Tickets for the premiere of Macbett and the performances scheduled for October 20 and 25 can be purchased at the theatre’s ticket office (weekdays between 10 am and 2 pm), as well as online, at www.biletmaster.ro.