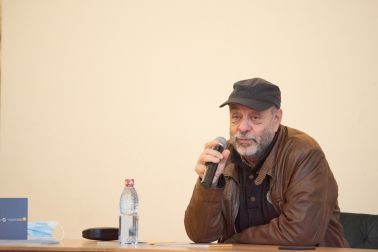 Gábor Tompa, the director of the Hungarian Theatre of Cluj, presented the plans for the 2021/2022 season during a press conference that marked the beginning of the upcoming season. He hopes that despite the theatre being forced to operate again within the restrictions set forth by the pandemic, he is confident that the events planned for this season will be able to take place.
The first premiere of our 229th season was Chekhov's The Cherry Orchard, directed by Yuri Kordonsky, already presented on September 1. Following the event, Silviu Purcărete began rehearsing Eugène Ionesco's drama Macbett, which will premiere on October 13, in the theatre’s Main Hall.

The Cluj company is preparing for eight additional premieres for the upcoming season. Gábor Tompa will direct William Shakespeare's tragedy Hamlet, featuring Miklós Vecsei H. in the title role, followed by his staging of Happy Days! by Samuel Beckett for the theatre's Studio Hall.

The planned premiere of Hamlet will take place on December 3, which will also coincide with the opening performance of the Showcase 2021 mini-season organized between December 3–10 by the Hungarian Theatre of Cluj. Included in the mini-season will be the theatre's newest performances and those that enjoyed limited viewings due to the pandemic. These are: Eugéne Ionesco's Macbett (d. Silviu Purcărete), A. P. Chekhov's The Cherry Orchard (d. Yuri Kordonksy), William Shakespeare's  Romeo and Juliet (d. Attila Vidnyánszky Jr.), Erős Ervin - Klemm Dávid - Lénárd Róbert's Animal farm, based on George Orwell (d. Poltás Zoltán), A Doll's House (d. Botond Nagy), András Visky's Porno - The Story of My Wife (d. Árkosi Árpád).

The first premiere of 2022 will Botond Nagy's stage adaptation of Antal Szerb's Journey by Moonlight, which was originally scheduled for the 2020/2021 season but was postponed due to the pandemic. Andrei Șerban will once again collaborate with our company this season, after already having staged 3 productions at our theatre (Uncle Vanya, Hedda Gabler, Cries and Whispers) that continue to be highly successful. This time, he will direct contemporary English author Robert Icke's Sophocles transcription entitled Oedipus for the theatre’s Main Hall in March, while Ferenc Sinkó will direct a contemporary German text, Anne Lepper’s drama Seymour, for the theater’s Studio Hall. In May, László Bocsárdi will create a stage adaptation of Zsigmond Móricz's novel Relations for our Main Stage.

This season marks the start of an international project initiated by the Union des Théâtres de l’Europe entitled CATASTROPHE, which will include the participation of 16 European theatre companies and will result in the staging of seven co-productions. The aim of the project is to create international co-productions based on ancient Greek dramas that reinterpret said works through the lens of contemporary events. Directed by Gábor Tompa, the Hungarian Theatre of Cluj, in collaboration with the Constanța State Theater, and the Slovenian National Theatre in Ljubljana, will create a four-language performance based on Aeschylus' tragedy Prometheus Bound and Samuel Beckett's play Catastrophe. The outdoor premiere of the performance will take place in Constanța in June 2022, followed by its Ljublajana debut in the following autumn. Cluj audiences will have the opportunity of viewing the performance for the first time at the 2022 edition of the Interferences International Theatre Festival.

The last premiere of the season will be directed by Attila Vidnyánszky Jr.; the performance entitled The Young Barbarians -  about the friendship of composers Béla Bartók and Zoltán Kodály - is a co-production of the Cluj company and the Gyula Castle Theatre.