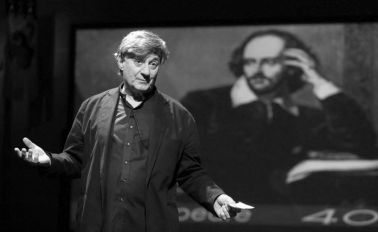 Hamlet, beyond the theatre, on the stage of history

Of all the actors of any time and anywhere, Ion Caramitru was perhaps the only one who burst onto the stage of history, without ever leaving either theatre or film. He heralded freedom in December of 1989, and became the symbol of that providential moment, which seemed impossible without him. But what remained was the Actor. Even then. He was Hamlet, the prince of justice and truth, telling us that we had won, that a new age had commenced. More recently, after almost three decades, he became Prospero, the wordsmith who reached the age of forgiveness and reconciliation. His entire destiny was placed under the sign of Shakespeare, in art and life alike. In so many unforgettable roles, on the big screen, at Bulandra, at the National Theatre, in other European theatres, he always knew how to be himself, while becoming someone entirely different every single time. That's why he wasn't called "Maestro." It would have been too generic a title, acquired by many artists and inappropriate precisely for this reason. Caramitru was unique. He is unique. And it is only now when he has become a legend in his entirety that we understand his value, his incomparable personality. Together with Ion Caramitru ended not only a chapter of Romanian culture, a page in the existence of this nation, but a whole world. He was an entire world. As for us today, through a twist of fate worthy of reflection, we can say that we were his contemporaries.