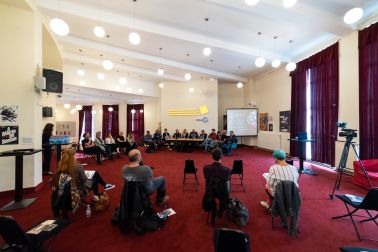 The 2021/2022 season’s first premiere at the Hungarian Theatre of Cluj – Chekhov’s The Cherry Orchard, directed by Yuri Kordonsky - will take place on Wednesday, September 1, at 7 pm, in the theatre’s Main Hall. This is not the first staging of the director, as he has previously worked with the company for the 2016 premiere of Maxim Gorky’s The Lower Depths.

According to Yuri Kordonsky, the recent past has changed the rhythm in which we live our lives, our relationship with time, and this has encouraged him to choose a piece that can address this experience. During the pandemic, we were forced to lock ourselves inside, stay home, and face issues of time and mortality that we usually like to forget. This is how Kordonsky came to the idea of staging The Cherry Orchard: Chekhov's masterpiece is about time, the nature of time, our conjecture about what time is. About the way the present time clashes with the past and the future. This is also what the performance reflects on.

Dragoș Buhagiar, the set and costume designer of the performance, said the characters needed to be re-introduced so that Chekhov’s works could be dealt with without clichés, and so that the set was not merely an aesthetic notion, but an environment in which the characters could really live and fill out the space. When working with the director, the main question was how to create a space for memory that could evolve with the performance itself. Eventually, a space was born that coexists with the text and events of the play.

Imola Kézdi, who plays Ranevskaya in the performance, said the following about the rehearsal process: “I chose this profession in the hopes of encountering such work. If I were just a cup of coffee within this performance, I would still feel entirely fulfilled.”

Tickets for the premiere of The Cherry Orchard and additional performances can be purchased at the theatre’s ticket office (weekdays between 10 am and 2 pm), as well as online, at www.biletmaster.ro.