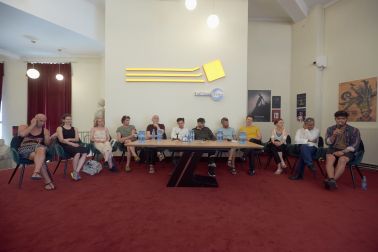 The Hungarian Theatre of Cluj closes its 2020/2021 season with the premiere of William Shakespeare’s well-known tragedy, Romeo and Juliet, directed by Attila Vidnyánszky Jr. While the production’s original opening was scheduled for the fall of 2020, the pandemic-related health restrictions prevented the play to be brought to audiences sooner.

The premiere of the production will take place on Saturday, July 10, at 7 pm, in the studio space envisioned on the main stage, the second performance will be presented on July 11, while subsequent performances of Romeo and Juliet will be resumed in the new season, starting with September 2021.

According to Attila Vidnyánszky Jr., “Since everyone already has an idea about what Romeo and Juliet is, the viewers arrive to the theatre already knowing or suspecting what awaits them. I felt that my task should be for the viewer to come across something that is not at all what they expect, to also receive something from a theatrical standpoint that is not necessarily the more traditional, more conventional form of theater.”

At the press conference that preceded the premiere, when asked by general manager Gábor Tompa what he as a director considers to be important in the play’s system of relations, director Attila Vidnyánszky Jr. stated the following: “Romeo and Juliet is a suitable material for trying to address what freedom means to us today and what we think, how we feel about this word. This was reflected not only in the text but also in the method used during rehearsals.”

The production was directed by Attila Vidnyánszky Jr., while the creative team was made up of set designer Csaba Csíki, costume designer Zsuzsánna Kiss, and Ferenc Sinkó, who envisioned the stage movement.

Tickets for the performance can be purchased at the theatre’s ticket office (weekdays between 10 am and 2 pm), as well as online, at www.biletmaster.ro.