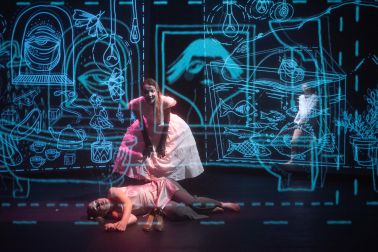 THE HUNGARIAN THEATRE OF CLUJ IS REOPENING ITS DOORS IN MAY!

After a brief attempt in February, the Hungarian Theatre of Cluj reopens its doors in May, hoping that this time it will be able to host its audiences uninterrupted, until the end of the season. According to the current health regulations in effect in Cluj-Napoca, theaters have been allowed to operate at 30% capacity.

On May 9, 10, and 27, at 7 pm, Henrik Ibsen's A Doll's House will be presented at the theatre's Studio Hall. The production that was staged by Botond Nagy was nominated for Best Direction and Best Set Design at the UNITER Awards of 2020. Starting with the 2020/2021 season, the production will feature a new cast as Nora will be portrayed by Anikó Pethő, while the role of Helmer will be played by Balázs Bodolai.

On May 13 and 14, at 7 pm, Leta Popescu's staging of the collage performance entitled In(visible), will take place in the theatre's Studio Hall.

Within the performance of (In)visible, the images associated with a collage of texts written by Romanian and Hungarian contemporary authors form a continuous series, not unlike a visual installation. It is up to the viewer to curiously follow this process of reflection about himself, the individual, living in the world, as well as the world that surrounds him.

The first in-person premiere of the season will take place in the Main Hall on May 21, at 7 pm, when a musical adaptation of George Orwell's Animal Farm will be presented to audiences. The production was staged by Zoltán Puskás, the director from Vojvodina, who previously staged the highly successful performances of The Wizard of Oz, and The Jungle Book at the Hungarian Theatre of Cluj. It will be the world premiere of this version of the Animal Farm, George Orwell's novel being adapted to stage by Róbert Lénárd, while the music was composed by Ervin Erős and Dávid Klemm.

Subsequent performances will take place on May 22 and 28, also at 7 pm, in the theatre's Main Hall.

On May 30, at 7 pm, the highly acclaimed performance of Fiddler on the Roof will be presented, in the Main Hall of the theatre. Due to the current health pandemic, the production directed by László Béres could only be presented to audiences on three previous occasions thus far.

Information about the tickets purchased and unused in 2020:

Tickets purchased in 2020 at the theatre’s ticket office and on the Biletmaster website and not yet redeemed can be used for this year’s performances. Tickets can only be exchanged for current dates at the theatre’s ticket office no later than 2 days before said performance, depending on the number of available seats, by presenting the tickets/barcodes.

Tickets for the May performances can be purchased at the theatre’s ticket office (on weekdays between 10 am and 2 pm) and online at www.biletmaster.ro.

We remind our viewers that for the health and safety of us all, audience members must strictly observe existing health regulations.