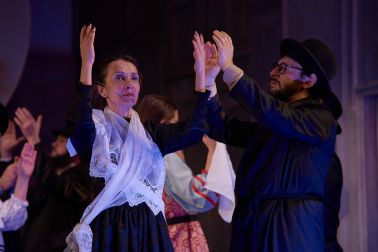 THE HUNGARIAN THEATRE OF CLUJ RESUMES ITS PERFORMANCES!

The Hungarian Theatre of Cluj invites its audiences to live, in person performances once again, this February.

On Wednesday, February 17, at 8 pm, György Dragomán's drama Galoshes will be performed in the theatre’s Studio Hall. Staged by András Visky, from this year on, the production will feature Eszter Román in the role of Annamari, while Zsolt Gedő will portray the character of Lieutenant Barta.

On Thursday, February 18, at 8 pm, Botond Nagy’s staging of A Doll’s House will take place in the Studio Hall. The production’s new cast featuring Anikó Pethő in the role of Nora, and Balázs Bodolai as Helmer was presented only once to audiences, however, the lifting of health restrictions means many more renditions of Ibsen’s once controversial play.

Directed by László Béres, Fiddler on the Roof premiered in February 2020 to great public success, however, due to the global health pandemic and subsequent health measures the performance was presented merely twice last year.

The highly successful, humorous musical created by Joseph Stein - Jerry Bock - Sheldon Harnick is about the life of a Jewish family, directed by external constraints and inner desires, in a turbulent historical time, but most of all about the changing world and values that are eternal, about the meaning of humanity, family, faith, community, and solidarity.

The performance will take place on Sunday, February 28, at 7 pm, in the theatre’s Main Hall.

Information about the tickets purchased and unused in 2020:

Tickets purchased in 2020 at the theatre’s ticket office and on the Biletmaster website and not yet redeemed can be used for this year’s performances. Tickets can only be exchanged for current dates at the theatre’s ticket office no later than 2 days before said performance, depending on the number of available seats, by presenting the tickets/barcodes.

Tickets for the February performances can be purchased at the theatre’s ticket office (on weekdays between 10 am and 2 pm) and online at www.biletmaster.ro.