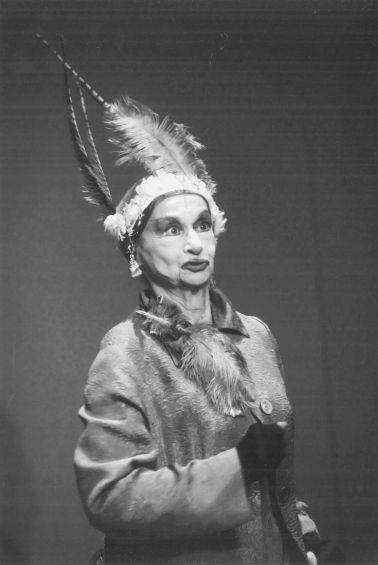 As I heard the news of Gaby Mende's passing, Psalm 90 came to mind. I reached for it, and read it out loud. According to tradition, this Psalm is the prayer of Moses that evokes the swift demise of human life, in glaringly beautiful lines. No matter how long we live, perhaps seventy to eighty years, or even more, the psalm says, our lives “[are] soon cut off, and we fly away.”

Gaby Mende flew away from amongst us.

The unprecedented pain of separation, and the resulting void that can never be filled shrinks the entirety of life into a single moment.

Now I am not thinking primarily of the actress, but of her as a mother, since Gábor Tompa's mother was the one who left us. We share Gábor’s pain as friends and as members of the Cluj company, yet we know that to be impossible. We offer our condolences, yet we feel that what we are saying is quite difficult, as the pain itself is undividable. A separation, an act of tearing away: as the death of the mother exposes awful depths within a soul.

Gaby Mende was not a member of our company, yet on a human level we became very close, which is the reason why we all mourn her demise. Her Cluj portrayal of Nell in Endgame, with her liveliness and wisdom, still permeates my soul. In the role of Nell, she played an elderly woman who was preparing to die, and Gaby Mende chose the most difficult path in this regard, playing her with transparent simplicity and honesty. As if she did not want to face the troubling question of her own death as an actor, but as an everyday individual, since this chance was offered to her by Beckett’s particularly profound role. She no longer acted at all, but, like the old actors just wanting to move inward, gave herself over to this exceptional and heartbreaking situation of loneliness.

She was full of liveliness, an eagerness and desire to learn, and the joy of acting together with others.

Since then, the Beckettian "Ah, yesterday!" echoes in my mind always in her voice. Yes-yes, all of a sudden the light of a pair of eyes dims, and a human life turns into yesterday. In the very moment that the Spirit moves into God’s eternal present, from which we are stem.

Crying with the weeping is also taught in Scripture. This is what we are now doing; with you, Gábor. There are no words that would mean more than that.