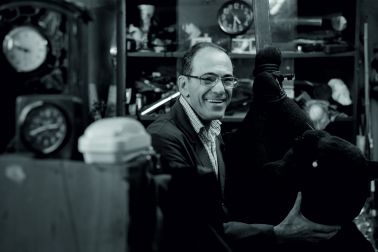 Tibor Molnár (Tibike), who had been working for the theatre for no less than 44 years, from the time he was 17 and until his retirement in 2017, has passed away. He worked for our company in multiple capacities, from his beginning as a stage worker, then as a prop master, and was also featured on stage in several performances.

In a 2015 interview about his work and the world of theatre, he stated: “You can't learn this job in a short while. I can train a lathe or a locksmith in six months. From then on, he becomes a specialist. But you learn and teach the prop master profession for your entire lifetime. I am already teaching, yet I'm still learning. […] Csipike, the evil dwarf, was the first production I worked on. I also had a scene in it. I had a squirrel- puppet, and when its lair opened, I was there handling it. The squirrel was doing his morning exercise routine. I have been featured in a lot of performances. My favorite experience was with The Paul Street Boys. I sang, had a solo, and was alone on stage during the performance. I also performed in The Bald Soprano, in Mr. Doctor. I was nervous, since the entire technical team was behind the scenes, watching me. In The Bald Soprano, opened and closed the performance. By myself. Nicely dressed, with a top hat, walking stick, wearing make-up. I played a puppet factory owner. Behind me there was a huge shelf, I lifted it. The performance ended with the same tableau, with me lowering the shelf. If I weren’t a prop master, I'd be a waiter. I really like it. I also was a waiter within as performance, in Celebration. I toured a lot. I've been to Europe, I've been to Korea, Colombia, and who knows what else awaits me further down the line."

May he rest in peace.

The Company of the Hungarian Theatre of Cluj