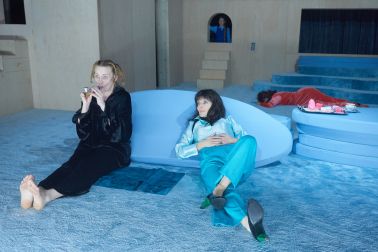 ALICE IN BED AT THE HUNGARIAN THEATRE OF CLUJ

On Saturday, December 14, at 8 pm, the Hungarian Theatre of Cluj will present the premiere of Susan Sontag’s Alice in Bed, directed by Dorka Porogi.
At the press conference preceding the premiere, András Visky, the theatre’s Artistic Director, said that this production would conclude the series of winning projects of the Competition for Young Theatre Directors, organized by the institution. In 2017, the Hungarian Theatre of Cluj announced a competition for young theatre directors, in order to offer newcomer theatre creators the opportunity for development. The four selected projects were completed in 2019, with 21 young creators - directors, designers, playwrights, composers, choreographers - participating in the staging of said productions.
Dorka Porogi, Alice in Bed’s director, stated the following concerning Saturday's premiere: “Susan Sontag's play aims to magnify a certain state. As referenced also by the title of the piece. What is it like, when our bodies do not obey us, however determined we are in our resolve. But what is Alice's illness? Viewers will have to answer that question for themselves after watching the performance.”
For Imola Kézdi, the actor who plays the title role, it was important not to portray the protagonist as a depressed person, but rather to approach the character from a playful standpoint: “The play is highly layered, there are many secrets lying behind simple sentences. A simple type of communication can truly hurt the soul of the receiver.”
Creators: visual designers Adrian Ganea and Anna Kupás, composer Cecilia Trabalka, playwright Lívia Barts and choreographer Attila Bordás.
Alice in Bed’s title role is portrayed by Imola Kézdi, with additional roles played by Csilla Albert, Zsolt Bogdán, Loránd Váta, Réka Csutak, Anikó Pethő, Gizella Kicsid, Andrea Vindis, Áron Wagner, Péter Árus and Tímea Jerovszky.
Subsequent performances will take place on December 15 and 28, at 8 pm, in the Studio Hall. Tickets can be purchased at the theatre's ticket office, as well as online at www.biletmaster.ro.
Copyright © 2020 Hungarian Theatre of Cluj. All rights reserved