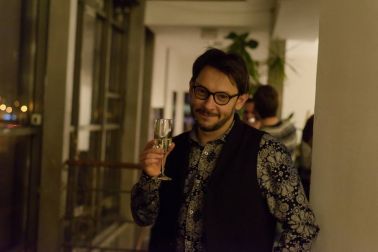 The Hungarian Cultural Society of Transylvania (EMKE) has awarded its Gróf Miklós Bánffy Prize of 2019 to Róbert Laczkó Vass, for his unrelenting work in cultural preservation and community-building.

Laczkó Vass Róbert was born in Remetea (1976), attended the Benedek Elek Teacher Training School in Odorheiu Secuiesc (1995), and earned a BA in acting from the Theatre Department of Babeş-Bolyai University. In addition to his acting career, he often performs as a singer, while sometimes also leading television and radio programs. Since September 2000 he is a member of the Hungarian Theatre of Cluj.

Every year, the Hungarian Cultural Society of Transylvania holds its public assembly on the weekend closest to the anniversary of its founding date of April 12, 1885. The award ceremony will be held on Saturday, April 13, at 3 pm in Cluj-Napoca, at the Assembly Hall of the Institute of Protestant Theology.

Our heartfelt congratulations to Robert Laczkó Vass for the award!