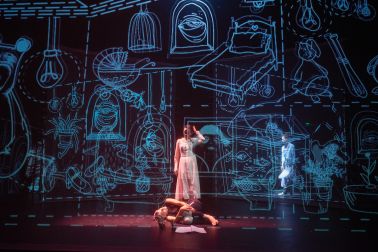 The Hungarian Theatre of Cluj will premiere its production of Ibsen’s A Doll’s House – directed by Botond Nagy – on Saturday, March 16, at 8 pm.

Nóra realizes that the doll house she inhabits is getting increasingly narrower. That behind the embellished walls lie the recurring catatonic nightmares which she must fight if she wants to become a human being. If she wants to be free. With freedom comes sacrifice.

According to director Botond Nagy, the idea of the coma came about from personal experience, and was the starting point for creating a socially aware performance. “Nora wakes up from a coma. The act of awakening is a painful process, a sort of swirling hypnosis. A struggle, in which cruelty appears without adornments. Agamemnon sacrifices Iphigenia to win the war, while Nora sacrifices her present to win her own wars.”

András Rancz, the visual designer of the production, spoke about the role of the digital realm, and visual projection: “We have tried to organically melt the digital realm and reality together. Since there are no traditional sets on stage, the visual realm of the performance is made up of projected images and projections. The great advantage of this is that we can imagine and create almost anything we might think of. The whole space breathes together with the actors, and thus it becomes a much more organic part of the performance in contrast with the elements of traditional set design.”

The next performances of Ibsen’s masterpiece will take place on Sunday, March 17, and Thursday, March 28. Tickets can be purchased at the theatre's ticket office and online at www.biletmaster.ro.