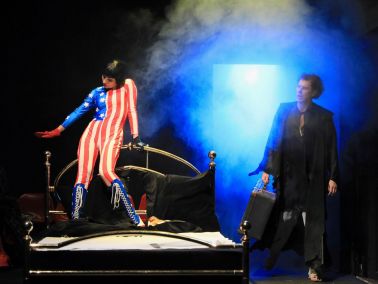 The Hungarian Theatre of Cluj presents Tony Kushner’s two-part drama Angels in America, under the direction of Victor Ioan Frunză. Created at the beginning of the 1990s, the play is a reflection of America in the Ronald Reagan era, focusing on issues such as homosexuality, AIDS, climate change or the penetration of communism in the US.

One of the special features of the drama lies in the fact that it consists of two parts that can be individually interpreted; the two segments can be viewed by audiences on two consecutive evenings. However, the full effect of the play is achieved by viewing both parts. The multi-threaded narrative focuses on a homosexual couple living in New York, on the outskirts of contemporary society. All the characters of the play belong to a minority group (gays, Jews, Mormons), the play focusing rather on their humanity than their differences.

The story itself is pervaded by the convictions of the self-identified activist author, namely that the individual is in fact responsible for causing social change and that the struggle to achieve change is far from being hopeless. Also, another crucial principle of the play is that sooner or later, the consequences of our actions and decisions will come back to haunt us, said Balázs Bodolai, one of the cast members of the performance.

Tickets for the two-part play can be purchased at the theater’s ticket office, as well as online at www.biletmaster.ro. Those who purchase tickets for both evenings will be granted a discount.