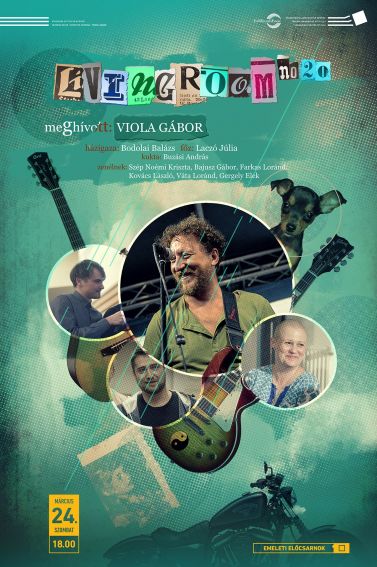 A Conversation with Gábor Viola

We are talking in the Upstairs Foyer, while at the same time they are rehearsing Puccini’s Tosca in the Main Hall. The perfect backdrop. Gábor's story is the novel of change. Astonishing vortexes, breathtaking twists and turns, undefined depths on the cusp of which someone is hanging on, while sliding lower and lower, and then all of a sudden, gathering all his strength, he starts climbing, continuing to do so until the storm clouds are left behind, and he finds himself on the ridge of the mountain glowing in the sun, where – with his muscles still trembling - he tries to piece together all that has happened. Or is he? Or does he just rest and move on? Never looking back, simply focusing on what’s next? A Transylvanian novel about a Hungarian family, set in the late 20th century. Of course, the story of every family could be turned into a novel, still, there are certain ones in which the outside world, the external environment interjects with irresistible power, while critical events are lurking around indiscriminately also on the level of individual existence. There is everything here: a Balkanic champion, an inventor, a talent who is banned from pursuing an artistic career, then another who succeeds, an officer of the secret police, a military officer, and if we go back far enough, we can even reach back to Matthias Corvinus and sunlit Italy.

I remember perfectly as Gábor was on stage in Târgu Mureş, he managed to be together with others while still being separate. Being together presented as an option, not as an obligation.

While rehearsing with Langhoff in Cluj, when the composer, director, dramaturge and translator have all lost their fuse, Gábor was still calm, as if his nervous system would obey a different set of impulses. He is not swept away by the crazed atmosphere. Can that be learnt? Or is it that it can only be learnt?

A few years ago, during a celebration of the World Theatre Day, Gábor has been asked what was the best performance he ever participated in. His answer came quickly: the one we are currently rehearsing, that has yet to have its premiere. The present that continuously overrides the past.

Join our Saturday afternoon conversation with Gábor Viola about what was and what is. A snapshot is in the works.