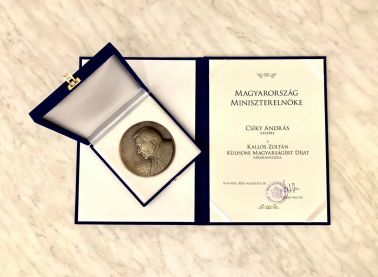 On December 18, the Zoltán Kallós Awards for the Hungarian Diaspora were presented at the Hungarian Theatre of Cluj. Among the recipients is also actor András Csíky, our company’s honorific member.

András Csíky is a now retired actor of the Hungarian Theatre of Cluj, a crucial figure of the Hungarian language theatre in Transylvania. Not only did he create long-lasting portrayals on stage and on screen with his art, but he also played a seminal role in educating new generations of actors.

The award ceremony was opened with a speech given by Árpád János Potápi, Secretary of State on National Policy under the Office of the Prime Minister, followed by the award ceremony, where actor Zsolt Bogdán received the award on behalf of András Csíky.

"For his tireless work in shaping the future of Hungarian theatre, educating the young generations and all that András Csíky did for the community and the public, makes him worthy of the Zoltán Kallós Award for the Hungarian Diaspora" - said Róbert Laczkó Vass, the host of the award ceremony.

The prize is awarded to Hungarian and foreign persons and organizations engaged in outstanding activities regarding public life, education, culture, preservation of national heritage, religious life, science, mass media, and economic self-organization, and is awarded by the Prime Minister of Hungary.

Our heartfelt congratulations to the award recipients!