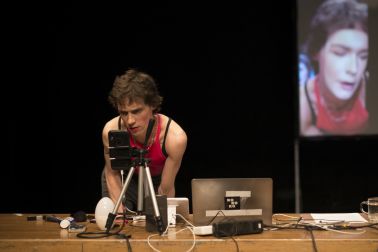 The second week of the 7th Interferences International Theatre Festival will feature plays written by the most important authors of universal literature, such as William Shakespeare (The Tempest), A.P. Chekhov (Platonov), Maxim Gorky (The Lower Depths), Roger Vitrac (Viktor or Power to the Children) and Henrik Ibsen (Rosmersholm). Among the directors who staged the performances presented in the next few days are Karin Beier, Lev Dodin, Yuri Kordonsky, Silviu Purcărete and Andriy Zholdak.

Also, in the Off programme, productions by independent artists such as Leta Popescu’s (In)Correct from her Collage trilogy, or ESCAPIST.fbx, defined by the creators as a “theatrical journey with a performative multimedia installation” can also be viewed.

You can still register for the Be Arielle F performance broadcast on Zoom at office@huntheater.ro. As the number of participants is limited to 50 people, participation is subject to pre-registration.

Be Arielle F will take place on November 24 and 26, at 8 pm on the Zoom platform, and it will have Hungarian, Romanian, and English subtitles.

All performances are available free of charge at http://www.interferences-huntheater.ro, while the OFF section will be broadcast on the festival’s Facebook page (www.facebook.com/Interferences.Festival).