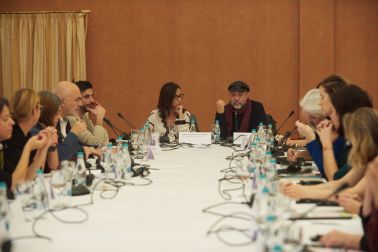 This year's second General Assembly of the Union des Théâtres de l'Europe took place in an unusual way – the meeting that had been initially scheduled to occur in Athens ended up happening online, on 18 October, due to the health restrictions that are in effect. During the General Assembly presidential and board elections also took place. The representatives of UTE member theatres have unanimously elected Gábor Tompa, the Artistic Director of the Hungarian Theatre of Cluj, as president for a second term. The newly elected UTE board members are: Amalia Kondoyanni (National Theatre of Northern Greece, Thessaloniki), Nuno Cardoso (Sao Joao Theatre, Porto, Portugal), Florian Hirsch (Luxembourg National Theatre), Irina Tokareva (Stanislavsky Electrotheatre, Moscow, Russia), Francisca Carneiro Fernandes (Porto, Portugal), Csaba Antal (Budapest, Hungary).

As President, Gábor Tompa would like to continue the work he started as the head of the UTE two years ago, to carry out programs and projects focusing on international cooperation between member theatres in the most effective way possible, to organize regular summer schools, artistic exchange programs and workshops, and he also finds important to continue holding an anual UTE festival, an event that was revived in 2019 by the Hungarian Theatre of Cluj after an 11-year absence.

Celebrating its 30th annniversary this year, the UTE was founded in 1990 by French Minister of Culture Jack Lang and Giorgio Strehler, director of the Piccolo Teatro in Milan. The organization creates sustainable forms of transnational cooperation that culminate in projects that have a critical approach to today’s society. Throughout the decades, the organization was led by such renowned figures as Gábor Zsámbéki, who led the UTE after Strehler's death until 2004, Alexandru Darie, director of the Bulandra Theatre in Bucharest, who passed away last year, and Israeli director Ilan Ronen, former director of the Habima Theatre.