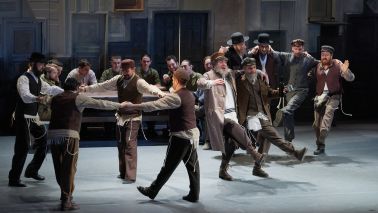 Starting with October, the Hungarian Theatre of Cluj awaits its audiences inside the institution’s Main Hall, however, we continue to showcase our online performance as well.

Botond Nagy’s staging of A Doll’s House will be presented on October 4, at 8 pm, in the Studio Hall, with a new cast this season. Hence, Nora will be portrayed by Anikó Pethő, while Balázs Bodolai will play the role of Helmer. An additional performance of the play will take place on October 19, at 8 pm.

The highly successful musical Fiddler on the Roof will return to our stage starting with October. Following the February premiere, the performance was presented to audiences only two times more, while the subsequent sold out performances that were initially scheduled to take place had to be cancelled due to the global pandemic we are currently experiencing. In the new season, Tamás Kiss will step into the role of Motel Kamzoil, while Eszter Román will play the role of Bielke. The ensemble cast portraying the village’s Jewish men and women will also feature Zsolt Gedő, one of the newest members of our company, as well as guest artist Edina Fodor. The performances will take place on October 16, 25 and 30, at 7 pm in the theatre’s Main Hall.

Robert Wooruff and András Visky’s joint project Caravaggio Terminal, which has been revived in March of this year, but was also postponed due to the pandemic, will take place on October 24, at 8 pm, in the Studio Hall.

All of the October performances will have both Romanian and English surtitles.

Directed by Gábor Tompa, the joint production of the Hungarian Theatre of Cluj and the Bucharest Nottara Theatre entitled Jonah is performed in Romanian, with Hungarian and English surtitles. Marin Sorescu’s well-known work will be presented on October 28 and 29, at 8 pm, in the Studio Hall.

The theatrical-film performance of POOL (no water) will also be available in October at www.eventim.ro. The online performance is a joint project of Radu Nica, Andu Dumitrescu and Vlaicu Golcea. The drama is a cynical satire of the art world and focuses on its (moral) mediocrity, while also being a reflection of today’s society where even the image of your own body can become the a product.

Tickets for the October performances can be purchased at the theatre’s ticket office (on weekdays between 10 am and 2 pm) and online at www.biletmaster.ro.