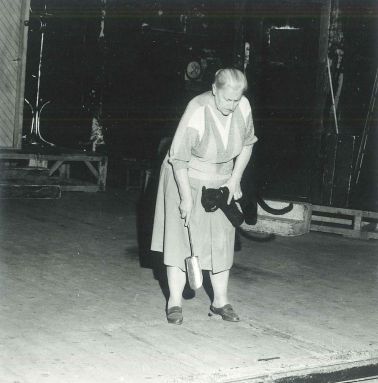 Lujza Orosz, the honorific member of the Hungarian Theatre of Cluj, has passed away at 94.

Lujza Orosz was born on December 19, 1926 in Horoatu Crasnei. She graduated from the István Szentgyörgyi College of Drama in 1950. She had been a member of the Hungarian Theatre of Cluj from 1948 until her retirement in 1977, however, she had continued acting within the company in the 1990s. In 1992 she became a honorific member of our institution.

Her acting was characterized by extraordinary suggestiveness and ease. There are numerous memorable roles that she portrayed, such as Gertrudis in Bánk Bán, the Queen of the Night in Csongor és Tünde, Hecuba in The Trojan Women, Mrs. Tarnóczy in Özvegy és leánya, Olga in Three Sisters, the Mother in the Bus Stop and the wonderful Old Lady in György Spiro’s Csirkefej.

She worked as a staff member of the Cluj Radio as well, also as a speech trainer at the Szentgyörgyi István College of Drama in Cluj-Napoca, and later on at the Gheorghe Dima Academy of Music.

Lujza Orosz's outstanding work as an actress was honored by several awards: in 1992 she was awarded the Poór Lili Prize by the Hungarian Cultural Society of Transylvania, in 1994 she received a Lifetime Achievement Award at the Festival of Hungarian Theatres, also in 1994 she received the Elizabeth Prize. Most recently, in 2016, she was awarded the Lifetime Achievement Award by the Transylvania International Film Festival (TIFF).

The Hungarian Theatre of Cluj will provide full funeral honors for the late actress Lujza Orosz.